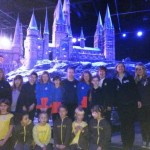 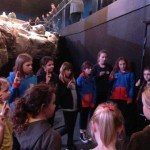 Members of 1st Gurnard Guides, along with several Brownies from Northwood and Gurnard have enjoyed a magical visit to Warner Brothers Making of Harry Potter Studio Experience in Hertfordshire.

This visit was arranged as a grand finale to the All Things Magical Challenge Badge the Guides had been working on during the Autumn term.  One challenge required the girls to explore the magical powers at Hogwarts where they were sorted into Houses before starting on other activities which included making potions, learning arm knitting for making House scarves, making House diadems and undertaking Hogwarts type games and challenges.

Two of the Guides, Charlotte Killoran (10) and Chloe Duggan (11), decided that The Harry Potter Experience was the perfect place to make their Guide Promise and were excited that they were able to do so in front of the model of Hogwarts School which was decorated as a Christmas scene at the time of their visit.

As the new Guides made their Promise the rest of the unit renewed their own Promises as Guides and Brownies with many of the general public forming an enthusiastic and supportive audience.

During the visit everyone was able to see the actual film sets and clothes used by the actors in the Harry Potter films, sit in the car and motorcycle used in the film, see how the special effects were made and used and were able to wander through Diagon Alley and Privet Drive. There was the opportunity to have a photo taken flying on a broomstick during a game of Quiddich and to be shown how to use a wand effectively!

A magical time was had by all and it was a very tired but happy band of Isle of Wight Guides that wended their way back to the Island after a very long but exciting day out.