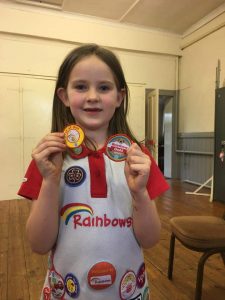 All the East Cowes Rainbows have been undertaking and enjoying the Girlguiding New Programme.
Lots of badges have been gained and Ellemae James (7) is the first in the East Cowes Unit to gain a Gold Award. Well Done Ellemae!

For her Gold Award Ellemae completed her family tree, recycling and book lover badges. These involved things such as drawing a family tree and making something from recycled materials- Ellemae made a lovely plant pot. She also designed her own recycling super- hero. She paid a visit to Brownies and found out more about them. As her final challenge she told the Rainbow unit what she did to get her Gold Award.

Meanwhile new Rainbows have made their Girlguiding Promise. Hattie is one of these and it is no surprise that she was keen to join Girlguiding IW and become a Rainbow as her Mum is Charlotte Young leader of the Rainbows and named ‘Pelican’ by the girls.
Charlotte comes from a family where Girlguiding and Scouting has been an interest over the years. Although Charlotte’s Mum was not a Brownie or Guide her Grandmother (Nana) belonged to Wootton Brownies. Other family members were Brownies, Guides and Scouts on the mainland except for Hattie’s Grandad who was a member of 1st East Cowes Cubs and Sea Scouts in the past.
Charlotte’s own Girlguiding career has covered some years and she said,” I was in the 6th Newport Brownies then 5th Newport Guides. I was a Young Leader at 5th Newport Brownies and 1st Godshill and Rookley Brownies. I also went to Bath University Guides and Scouts (part of SSAGO). I was then leader at 2nd Southampton North Brownies and now leader at 1st East Cowes Rainbows.” 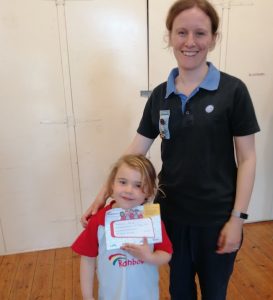 Photos show Ellemae with her Gold Award (top) and Hattie and ‘Pelican’ after Hattie had made her Promise.