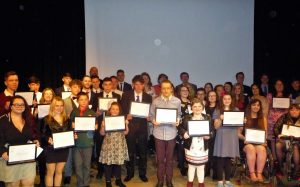 Some of those receiving certificates had battled against illness or adversity to make a positive change in their own lives and those of others whilst other recipients enjoy helping others. Many will continue to battle adversity whilst others will seek a new and even more positive path to follow.

Nominations had been sought from Schools, Colleges, Training Providers, Charities and individuals across the Island earlier in the year and there had been a very positive response.

Presenting the awards High Sheriff Ben Rouse said he was pleased to welcome so many deserving young people to the ceremony and congratulated them on their achievements.

There were two group awards presented to Task Force and Project Gold. Members of Task Force help each other or other young people with mental health issues whilst Project Gold comprises five students from IW College who are undertaking the volunteering section of their Duke of Edinburgh’s Gold Awards by organising a Sports/Leadership project at Nine Acres Primary School.

Many of the recipients had either been born with or developed medical conditions, some with very sudden onsets and life changing impacts.

Elyas Shahrestani arrived in the UK from Afghanistan speaking very little English. He was soon studying for his GCSEs and A levels. Wanting to be a doctor he undertook volunteering at St. Mary’s Hospital but it is still not certain if he can be a UK resident even though he has broken all ties with Afghanistan and speaks very good English.

Charlotte Hall struggled at school and life was hard at home. However, with her cheerful disposition Charlotte has won through and is now a popular student at Carisbrooke College where she is always ready to cheer up others.

Travis Smith has a rare form of cancer which means long hospital stays but he is always cheerful especially when listening to The Smiths or Morrissey.

Nicholas Earley is in remission from Hodgkin’s Lymphoma now but from the onset was determined to keep going with his sporting loves.

Nick Platt is still in recovery from a very aggressive disease but as well as working for A Levels has raised £3,250 for Ronald McDonald House in Southampton where his family stayed during his hospitalisation.

Another fund raiser is Lexi Coker who has collected £300 for the Spina Bifida charity as her younger brother has the condition whilst Yasmin Nigh is described as a ‘fund-raising dynamo’ having helped several charities and is now a member of Godshill Parish Council voicing the points of view of young people.

Ben Rouse concludes his very busy year as High Sheriff in early April. Amongst those attending the ceremony, in the Anthony Minghella Theatre was the Island’s High Sheriff elect-namely Gioia Minghella- Giddens the late Anthony’s sister.