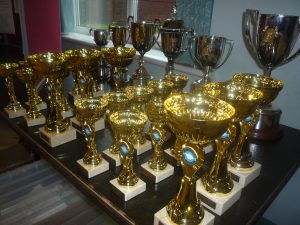 Making his debut in this year’s Isle of Wight Marathon Gary Marshall (number 102), an unattached (non-club) runner from Newport was the surprise winner in a time of 2:58:06.

Gary described his victory as beyond his wildest dreams, although he had aimed at running a sub 3hours time. He was running in support of local charity ‘Mountbatten’.

He was well in control during the first half of the race, before experiencing ‘heavy legs’. Gary held on though and was pleased to record a qualifying time for the 2020 London Marathon. His daughter is a member of Newport Rainbows and is very proud of her dad.

In contrast Matt Cheyney (number 24) (Denmead Striders) has clocked up 39 Marathons, with a best time of 2:51 in London. Running steadily throughout he took the runner up slot after 21 miles and finished in 2:58:43.

Completing the podium placings was Islander Dave Hunt (number 78) (Team Spy) in 3:01:06. Trained by now retired Ryde Harrier Geoff Watkin, Dave explained he felt OK for the first 19 miles before fading slightly and unable to prevent Matt from passing him. 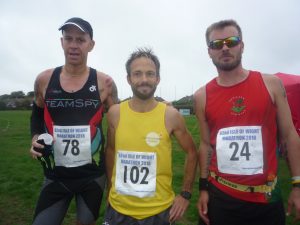 Paul Cameron IW Road Runners (IWRR) the 2009 IW Marathon winner was fourth man in 3:05:36 despite a lack of putting in miles of training. Although experiencing a problem after 23 miles he soldiered on, drawing on his vast long- distance running expertise. 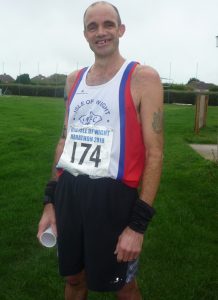 Elizabeth Steward from Denmead Striders was the first lady home in 3:34:26. Elizabeth once lived on the Island and attended school in Sandown. She said that she had enjoyed the race, but it was a real challenge. Elizabeth also won the prize for 1st female 35+. 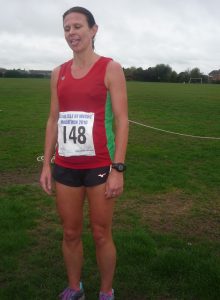 Runner up Hayley Baxter (IWRR) came home in 3:36:13 a time seven minutes faster than her race winner’s time last year. Hayley won the trophy for the first Island lady home. She explained she was neck and neck with Lizzie (Elizabeth) at the eleven- mile mark, but as she looked over her shoulder she said,” Lizzie just took off.” Hayley won the prize for 1st female 40+.

Wight Tri athlete Mary Norman was 3rd lady home in 3:47:29 as well as being the first lady in the Veteran 55+ category.

Stephen Hickman a member of IWRR was presented with a bottle of Champagne by his club to mark his achievement of running 150 Marathons. In this race his time was 4:30:17 and he was in 80th position.