Over the years members of Girlguiding IW have enjoyed a visit to the IW Steam Railway at Havenstreet.

Several units make the ‘Santa Specials’ one of their highlights of the year, with a ride on the train and a gift from Santa Clause.

However, the IW Steam Railway is not just for Christmas and forms an ideal venue to visit as all times of the year.

Recently Councillor Dave Stewart Leader of IW Council presented a tram to the IW Steam Railway, Havenstreet at a ceremony attended by several representatives of both the Council and the Steam Railway, who have worked together in making this important piece of Island transport history accessible to the public. 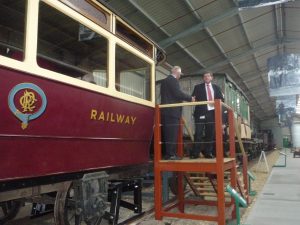 Phil Cotton worked on the restoration project in the mid- eighties. For some 18 months and with several other members of the Council’s heritage workforce, he particularly remembers working over a weekend to complete the upholstery. Finished in wine and cream and with wrought-iron balustrades the tram is a colourful addition to the collection.

At the hand-over ceremony Cllr. Stewart described the tram as an asset to the Island’s heritage collection and congratulated the team at the Steam Railway for their hard work and effort.

More than 90 years after a unique Island-built Pollard electric tram was first built in 1889, and last used to transport visitors up and down Ryde Pier, it is now on public display. This is the only surviving example of trams built by Pollard and Sons of Hill Street, Ryde and was designed to carry 20 passengers along Ryde Pier to the ferry.

After leaving service in 1927, it spent much of the last 90 years being used as a holiday chalet in Brighstone and even a chicken coop before being saved. In 1978, one-time Chairman of the IW Council, Bernard Pratt bought it at auction for £2 and decided to present it to the Council, which in the mid-eighties was able to undertake a cosmetic restoration, retaining many of its original features.

With the Isle of Wight Council not being able to put the tram on public display since 2011 the opportunity arose to transfer it to the Train Story Discovery Centre at Havenstreet Station with ownership of the tram handed to the IW Steam Railway in 2017.

Although the tram itself will be a static display, visitors can access the inside of the saloon and whilst seated on the seats restored by Phil Cotton and his colleagues, enjoy a five- minute film about the use of trams on the pier including photos of the final journey when the pier tramway closed in 1969. 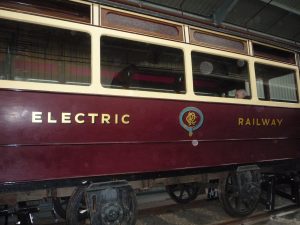 The Isle of Wight Steam Railway has also commissioned the restoration of a much later Drewery & Company diesel powered tram which took over from the Pollard in 1927. It is hoped to have this tram in working order by 2019, precisely 130 years after the Pollard first took to the rails.

Also housed in ‘Train Story’, the exhibition centre at Havenstreet, is one of the ‘stars’ of a recent TV programme in which well known TV presenter Peter Snow  achieved a lifelong ambition of driving a stream train. Like the tram this railway carriage was restored to its former glory  at IW Steam Railway and is now on display. 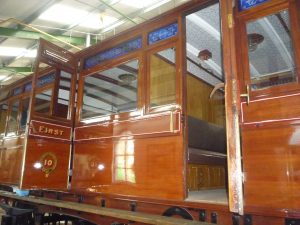