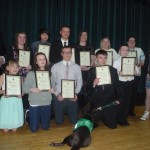 In his opening address, High Sheriff Ron Holland referred to the 2016 High Sheriff Awards as the most pleasurable function of his year in office. He said that the twelve recipients were positive role models, despite having to overcome adversity in their young lives.

William Kemp from Sandown had always wanted to join the Army. Tragically, he went down to Lymphoma, but after successful treatment was given the all clear. After working on his fitness he is now preparing for his chosen career.

Eleonore Jones was nominated by the Princes Trust. From classification as a NEET she enrolled on an intensive course run by the IW Fire Service. Her self confidence improved and she was top student on the course and is now a role model.

James Peto, whilst a student at Carisbrooke College overcame the loss of his father after suffering a heart attack. Described as a fantastic role model at school, he overcame adversity to record good exam grades.

Megan Hodgkinson lost her sister in a car crash two years ago. Despite her grief she has supported her mother. She now works with her school’s Global Rock and also helps the PTA fundraise.

Ayisha Keys who in the past came before the Youth Offending Team is now committed to working with the team, giving her time freely and pro-actively. She is now mum to two boys, who have transformed her life.

Ryan Little has attended St. Catherine’s School, Ventnor as a weekly boarder since 2013 as his home is in Southampton. Now a 6th former he has gained a range of independent skills despite having severe dyslexia.

Zoe Clarke looks after her mother who was severely injured in a car accident. Zoe supports both her own family and the Foundation her mother founded to help others in a similar position.

Jon Cooper is in mainstream school despite being Autistic and having anxiety. Since having his own dog (Sheriff) his life has blossomed and he now has a placement at IW College.

Reagan Thompson had difficulty in engaging with others at school. Having undertaken a work placement at West Wight Sports Centre she now supports others on their work placements as well as working at the centre.

Niamh Terry has dyslexia and suffers from bouts of depression and psychosis. After undertaking an engineering course at IW College she now plans to go to university and has a host of voluntary roles with charities.

Michaela Logan attends Carisbrooke College where she displays a maturity beyond her years having suffered a double family bereavement in her young life. Her mother died when Michaela was 7 followed by the sudden death of her father from a heart attack seven years later. Michaela is now studying for GCSEs.

Alfie Witcombe looked after his mother when she had cancer, but sadly she lost her battle a year ago. Alfie then pledged to raise funds for the Earl Mountbatten Hospice and Macmillan Nurses. To date he has raised £12,600 as part of a team and the 8 year old is an inspiration at Cowes Primary School.