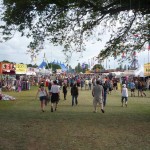 Isle Of Wight Festival organisers have announced the return of ‘Live and Unsigned,’ a competition that will see some of the most exciting unsigned acts in the UK battle it out to perform on the festival’s legendary main stage alongside Queen + Adam Lambert, Stereophonics and Faithless .
To be in with a chance of joining this year’s line up, artists can apply online by submitting an original song of their choice through the festival’s website. www.isleofwightfestival.com
A team of music industry experts will whittle down the entries with the finalists performing at the Half Moon in
London on March 29th. A live judging panel led by festival organiser, John Giddings, will decide the winner who will also receive the chance to record at the Skinny Mammoth studio on the Isle of Wight.
John Giddings said: “The festival has an amazing heritage with the acts we’ve had performing over the years, however we are dedicated to supporting new talent. This competition provides winners with an amazing opportunity to perform in front of thousands of people. We’ve always been really impressed by all of the talent who have entered in previous years.”
This year’s Isle of Wight Festival takes place 9th-12th June and will mark the 15th anniversary of The Isle of Wight Festival since it was successfully re-launched in 2002.