Organised by the Royal Ocean Racing Club, the Sevenstar Round Britain and Ireland Race is undoubtedly one of the toughest yacht races in the world. While other ocean races are longer, racing 1,800 miles around a coastline notorious for highly changeable weather, tides and currents, puts the race amongst the most difficult to complete, let alone win. Entries for 2014 included an amazing variety of yachts and sailors all of which gathered in Cowes ready for the start due on Sunday 10th August at 12 noon.

Plans were for the boats to leave Cowes with the start at the RYS line. The first part of the race would take the boats via Ryde and the forts before continuing along the south coast of the Island. After sailing along the coast of the SW of England in a westerly direction it was planned for the boats to travel around Ireland and Scotland, with its memorable landmarks including the most northerly lighthouse – Muckle Flugga- off the Shetland Islands before travelling through the North Sea and thus back to Cowes.

However, due to the remains of Hurricane Bertha the date and time for the race was changed together with the route-now to be in an Easterly direction around Britain and Ireland.  On Monday 11th August the boats left Cowes with a very strong wind behind them and were soon past Ryde and the Forts.

Two of the favourite boats to win the race had been in Cowes during Aberdeen Asset Management Cowes Week allowing crews to get ready. Britain’s twice Olympic silver medallist Ian Walker was skipper on Azzam (Determination), supported by Abu Dhabi.   He and the crew took part in this race prior to their second successive Volvo Ocean Race 2014-2015 which starts in October from Spain. Organisers of Volvo Ocean Race confirmed that the Sevenstar Round Britain and Ireland Race was part of their pre-race programme.

MOD70 Musandam-Oman Sail another favourite to be the first yacht to complete the course around GB and Ireland had Co-skippers Sidney Gavignet (FRA) and Damian Foxall (IRL). They had put together a MOD70 crew selected from Oman Sail’s elite squad of sailors, plus well-known South African Volvo and America’s Cup sailor Jan Dekker. Half of the crew was Omani for the first time. Prior to the start of the race Oman Sail had a stand on Cowes Parade with displays of Omani costumes and samples of dates.

Since Oman Sail was launched over 16,000 Omani children have learned to sail.

There was fast and exciting sailing for the start of the race from Cowes at 9am, with especially Musandam-Oman Sail flying along on its three keels. At 1130am, all of the 28 boats in the fleet were past Selsey Bill, experiencing over 30 knots of breeze as they reached at top speed. Musandam-Oman Sail averaged 30 knots of boat speed from the start and it was expected that if the MOD70 kept that up the team would finish the course in two and a half days, smashing the course record. As the day progressed Musandam-Oman Sail was soon over 40 miles ahead of the Volvo 65 fleet and the smaller boats were left in their wake.

Some boats retired on the first day due to the extreme weather conditions but most boats raced on not just trying to win the race but to break World Records.

On Thursday 14th August Sidney Gavignet and the crew of Musandam-Oman Sail, a MOD70 trimaran, crossed the finish line of the 2014 Sevenstar Round Britain and Ireland Race off the Royal Yacht Squadron, Cowes, at 12.42.36 BST.

Skipper Ian Walker had not competed in this event before and it proved a good test for the new Volvo 65 and the crew of eight. Their journey took 4days 13 hours 10 minutes and 23 seconds. After relentless, high speed racing pushing the crews and the boats to their limit, the strong downwind conditions abated as Azzam, the Volvo Ocean 65 class leader, approached The Lizard. Fading wind was the problem as the boat neared the south side of the Isle of Wight and Azzam were confronted by a tactical decision – to go inshore at St.Catherine’s Point or offshore looking for breeze. Many taking part in the JPMAM  Round the Island Race have had to make this decision  and Azzam went inshore.

Breaking another World Record was Volvo Ocean 65 Team SCA, skippered by Sam Davies which crossed the finish line at 06.10.39 BST on Saturday 16th August with an elapsed time of 4 days, 21 hours, 00 minutes and 39 seconds.

Three World Records already broken and now breaking yet another was Artemis – Team Endeavour, skippered by Brian Thompson which crossed the finish line at 23.00.54 BST on Saturday 16th August with an elapsed time of 5 days, 14 hours, 00 minutes and 54 seconds.

This breaks the previous World Record for Monohulls 60 feet and less set by Safran in 2011, by 19 hours, 48 minutes and 16 seconds.

This was the fourth World Record broken during the 2014 Sevenstar Round Britain and Ireland Race  and  with a number of boats still battling against wind and tides at this time the actual winner of the race had yet to be decided as all boats have a handicap.

However Jens Kellinghusen’s Ker 51, Varuna crossed the finish line at 12.10.32 BST on 17th August. Varuna was now in first place in IRC overall and with this time, corrected under IRC, it put the German yacht in an extremely strong position to win the Sevenstar Round Britain and Ireland Race.

By the 18th August ten yachts were still racing. Over the last 24 hours a low pressure system had arrived from the North West and was bringing gale force headwinds that hampered the progress of the fleet north of the Irish coast. Through the gale they sailed and by the 20th August Swish, skippered by Canadian Roderick Knowles, crossed the finish line off the Royal Yacht Squadron at 04.06.49 BST with an elapsed time of 8 days, 19 hours, 06 minutes and 49 seconds. This broke the previous World Record for Monohulls 40 feet and less, set by Concise 2 in 2010, by over 18 hours. This was the fifth World Record broken in this race.

By Day 11 of the race six yachts were still racing and after the gales light winds had slowed their progress. However the wind picked up again overnight much to the delight of the remaining competitors. British Soldier and Relentless on Jellyfish were having a tremendous battle in IRC Two and the three remaining Two-Handed teams were making great progress.

Although the six boats were still racing, The Royal Ocean Racing Club declared Jens Kellinghusen’s Ker 51, Varuna (GER), as the overall winner under IRC of the 2014 Sevenstar Round Britain and Ireland Race. Race sponsors Sevenstar Yacht Transport awarded Jens Kellinghusen with a $20,000 voucher to ship Varuna to their selected destination worldwide. It was decided that this was to be used to transport Varuna to Malta to take part in the Rolex Middle Sea Race, the final race of the RORC Season’s Points Championship.

All of the six boats remaining in the race were experiencing downwind conditions with plenty of breeze. J/122, Relentless on Jellyfish, skippered by James George, was just 38 miles from the finish holding off a strong challenge from the Army Sailing Association’s J/111, British Soldier, which was six miles behind.

Hanse 531, Saga, skippered by Peter Hopps, passed The Lizard at midnight and at 0900 BST, was 30 miles from Portland Bill with 100 miles to go. Just after midnight, Ian Hoddle’s Figaro II, Rare, passed Liam Coyne’s First 36.7, Lula Belle, as the Two-Handed teams approached the Isles of Scilly and at 0900 BST Rare had extended their lead by 11 miles as the two yachts passed The Lizard. However, after time correction, Lula Belle was still leading the Two-Handed Class by a considerable margin. Meanwhile, Werner Landwehr’s Figaro II, Dessert D’Alcyone, was 70 miles from the Isles of Scilly, 300 miles from the finish.

Three yachts finished the Sevenstar Round Britain and Ireland Race on Friday 22nd August, deciding the winners of both IRC One and IRC Two. There were celebrations on the dock for Relentless on Jellyfish, winner of IRC Two and Saga, winner of IRC One. British Soldier may have lost the battle with Relentless on Jellyfish, but the British Army Sailing Team on British Soldier was far richer for the experience.

Ian Hoddle’s British Figaro II, Rare with crew Conrad Manning completed the Sevenstar Round Britain and Ireland Race just after 0900 BST on Saturday 23 August 2014, taking Line Honours for the Two Handed Class after almost exactly 12 days at sea (elapsed time: 12 days 0 hours 18 minutes 09 seconds). No Two Handed team has ever completed the race before and with a water-line length of just 32 feet, Rare is also the smallest yacht to ever complete the race.

Ian Hoddle has been raising money for CLIC Sargent all season. This charity has been providing care for his five year old nephew James who lives on the Isle of Wight and who was diagnosed with an inoperable brain tumour last January. The plight of his young nephew, bravely fighting the disease, has been a big influence on Ian’s determination to finish the Sevenstar Round Britain and Ireland Race.
Liam Coyne’s First 36.7, Lula Belle with Brian Flahive as crew, finished the Sevenstar Round Britain and Ireland Race at 11:40:54 on Saturday 23 August in an elapsed time of 12 days 02 hours 40 minutes 54 seconds. The duo won the Two Handed Class and the combined IRC 3 and IRC 4 Class.

Shortly after midday on Sunday 24 August, Werner Landwehr’s Figaro II, Dessert D’Alcyone crossed the finish line and completing the race in an elapsed time of 13 days 03 hours 40 minutes 57 seconds, claiming third place in the Two Handed Class. Werner comes from Helgoland and is 71 years of age and although last to cross the line said “In four years, we will start this race again and I hope we will be better.”

Before the 2014 Sevenstar Round Britain and Ireland Race, a Two-Handed team had never completed the 1800-mile course. However three teams from Ireland, Britain and Germany have now accomplished that magnificent achievement. Racing Two Handed around Britain and Ireland requires all-round skill, great seamanship and tenacity. Most of the time, one of the Two Handed pair are alone on deck whilst a team mate sleeps.  It can be a lonely existence on deck and the lack of sleep and the effects of exposure to the harshest of conditions is bound to take its toll on both yacht and sailor. 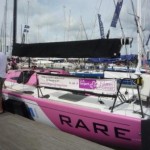