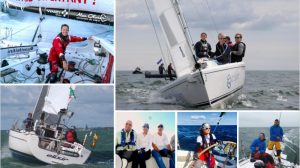 Back in 2015 a team from Girlguiding formed part of a crew for the Rolex Fastnet Race.  Most of the team came from the SW England Region and prior to undertaking the Fastnet had to compete in other offshore RORC races to log up their ‘sea miles’.

For the 2019 Rolex Fastnet Race their are a number of women taking part perhaps they will inspire GIrlguiding members to try this great yacht race again.

While crew lists for August’s Rolex Fastnet Race are far from finalised, currently just over 10% of those competing in the Royal Ocean Racing Club’s biennial voyage from Cowes to Plymouth via the Fastnet Rock will be women. While this is a long way from parity between the sexes, it is at least a step up from races say 20 years ago when the equivalent figure had yet to reach 5%.

To date only one female skipper has won the Rolex Fastnet Race – French solo sailor Catherine Chabaud (with a full crew) on board her IMOCA 60 Whirlpool-Europe 2 in 1999. However, Dona Bertarelli claimed line honours in both 2013 and 2015 with her partner Yann Guichard on board the 40m maxi trimaran Spindrift 2.

One reason for increased female participation, not just in the Rolex Fastnet Race, but also sailing generally, is thanks to female role models from Tracy Edwards and her high profile Maiden and, before her, Dame Naomi James and Clare Francis’ round the world voyages to the phenomenal, headline grabbing exploits of Ellen MacArthur and the round the world voyages of Dee Caffari.