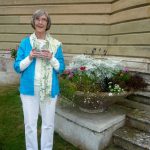 For the 2016 Wight in Bloom competition there were 14 entries from school gardens, which was an encouraging development. In the eleven categories there were three new classes- Best creative use of a Small Space, Best Coastal Garden and Best Edible Garden.

Kevin George CEO of Red Funnel, the main sponsor, said his company stepped in to support Wight in Bloom four years ago and would continue to do so.

He also said he made a promise a year ago to improve planting around the Red Funnel terminals and this had now been completed.

It was the second year of Visit Isle of Wight’s involvement in the event. Simon Dabell, Chair of VIOW compered the award Ceremony held in the ballroom of Northwood House, Cowes.

Referring to his own gardening skills Simon said he had killed a Wisteria and a Clematis but his Russian Vine was described as being OK. Quoting an excerpt from a national newspaper’s reference to the Island’s climate benefitting from “the last gasp of the Gulf Stream” his comment was received by much laughter from the audience and Alan who handed out the Awards.

Alan commented on the number of school gardens and said that he had started gardening when 9 years old. It was good to see children getting away from technology for some of their time and learning about nature and how to grow plants.

Large Front Garden: Oscar Stretch- Sandown. Once well known for his skill on the football field his garden is now admired by all his fans. 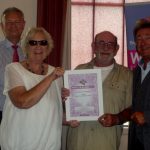 Young People’s Initiative: Cowes Primary School. Earlier in the year bug boxes had been donated to schools by Honnor and Jeffrey. 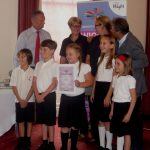 Community Floral Project: Shanklin Theatre. Described by the judges as a real wow and no weeds!

In recognition of the amazing support the late Peggy Jarman gave to Wight in Bloom it was announced that from this year the Overall Award would be renamed the Peggy Jarman Trophy.

Born on the Island, Peggy attended Nettlestone School and was a well respected County Councillor for a number of years. At the time of her death, just a few weeks ago, she was Honorary president of Wight in Bloom.

Rosalind Wyman, who was judged to have the Best Small Front Garden was the recipient of the Peggy Jarman Trophy. This was presented by Terry Jarman. 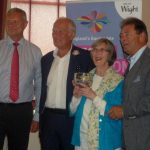 With a home on the Island Alan Titchmarsh, as well as being Patron of Wight in Bloom has recently become a patron of the Island’s Literary Festival. He told us that he had had a number of plant varieties named after him including a hosta, sweet pea, rose and fuchsia.

Following the presentation of the Awards all those receiving certificates as well as the category winners gathered for a group photo with Alan Titchmarsh, Kevin George and the Island’s High Sheriff Robin Courage. 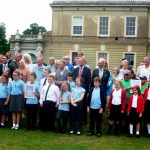