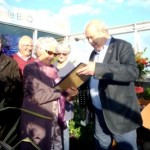 Celebrity gardener and TV presenter, Alan Titchmarsh MBE, VMH (Victoria Medal of Honour RHS) has agreed to become  Patron of “Wight in Bloom”, an annual horticultural competition which is open to all Island residents, with the aim to make the Island a brighter, greener place to live and visit.

Sponsored by Visit Isle of Wight (VIOW) – who have taken over management of the competition alongside Red Funnel Ferries,” Wight in Bloom 2015″ is being developed as a curtain-raiser to VIOW’s Garden Isle campaign, which will coincide with Visit England’s Year of the Garden 2106.

Residents, schools, businesses, community groups, towns and villages on the Island are invited to don their gardening gloves and take part in Wight in Bloom.

This annual competition is open to all Island residents and organisations to show the rest of the Island what they’ve been doing to brighten up their garden and improve the local environment.

To be in with a chance of winning, keen gardeners can choose to enter one of 8 main categories:

8              Best Tourist Attraction Garden (free to enter and paid admission tourist attractions are both eligible to enter this category).

For the 2015 event Visit Isle of Wight and Red Funnel Ferries are adding their support and financial backing to the event to help create a vibrant and welcoming environment for visitors.

Organisers hope that the appointment of popular celebrity gardener Alan Titchmarsh as Patron of Wight in Bloom will emphasise the Island’s green credentials and help inspire Islanders to get involved in Wight in Bloom this year.

David Thornton, CEO, Visit Isle of Wight, said: “We’re honoured that Alan has agreed to be our Patron of Wight in Bloom and now plan a major push to encourage more tourism businesses and retailers on the Island to show a bit of flower power this summer.

The success of the Wight in Bloom is testament to all the hard work and dedication by the organiser, Peggy Jarman, who over the years has worked with Island communities, businesses and local individuals to help create colourful displays at entrances to villages, around bus shelters, in pub gardens and in residents’  front gardens.”

Peggy Jarman said:  “I am thrilled and delighted that Visit Isle of Wight and Red Funnel have stepped in to support the competition.

Whether you are a novice gardener or an expert, everyone is very welcome to enter and make our Island a greener and more colourful place”.

Judging will take place in July and entry is free. There will be an awards ceremony held in August.