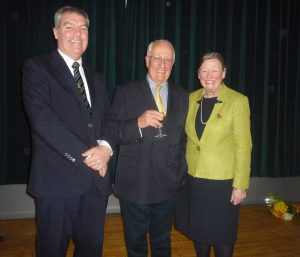 Riverside, Newport was the venue when the Voluntary Sector of the Island’s community said farewell to the Lord Lieutenant of the Isle of Wight.

Maj. Gen. Sir Martin White and his wife Lady White were welcomed to the gathering by Mike Bulpitt, Chief Executive of Community Action IW at Riverside.

Mike introduced Richard Priest OBE who had organised the event and acted as compere for the evening. Richard asked Sir Martin if he would like a drink – only to produce a one-off Island Vintage of ‘White, White Wight Wine’.

Among the guests were a cross section of the voluntary sector including the WI, Townswomen’s Guild, Girlguiding IW and IW Scouts together with a number of local organisations and charities, some having gained the Queen’s Award for Voluntary Service during Sir Martin’s tenure. 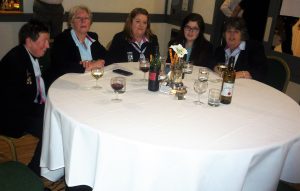 Richard introduced a ‘This is Your Life’ feature: Born in Seaview the infant Martin was christened at St. Peter’s Church and a slide showed Seaview in that time when it boasted a pier.

A fellow pupil at Sandown Grammar School was John Matthews who referred to Sir Martin’s devotion to the Army Cadet Force and said even at that young age he displayed his trademark tact and diplomacy.

Martin and his wife Fiona met at a party in Guildford when both were serving officers in HM Forces and they married in 1966. They have four children and now 13 grandchildren. Richard’s research revealed that Sir Martin had a total of 20 postings during his Army career.

In 1990, during the Gulf War, Sir Martin met John Major, the then Prime Minister. David Langford MBE read out a letter of good wishes received from Sir John Major. Sir Martin’s Army Service concluded in 1998 when he retired. A year later he was appointed Vice Lord Lieutenant of the Isle of Wight.

During his term of office as High Sheriff Robin Courage MBE had an idea to hold an Isle of Wight Day. He said he had 100% support from Sir Martin by then the Lord Lieutenant. Robin was not the only speaker during the evening who mentioned Fiona’s unstinting support- The Team White Factor.

Sir Martin’s 13 years term as Lord Lieutenant began in 2006 when the then IW Council Chairman Cllr Charles Chapman handed over the Scroll of Office. Charles recalled this moment as well as other events attended together.

In all, some twenty individuals gave personal testimonials detailing their link with the Lord Lieutenant. At the end of the evening the Island’s WI presented a special cake and apparently cake had played a large part in Team White’s lives.

In his response to the evening Sir Martin admitted to being stuck for words but summed up by saying, ”Thank-you from the bottom of my heart.”