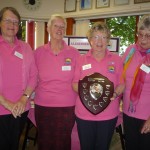 This year’s Community Action IW Awards, which encourage and reward the dedication within the voluntary sector, attracted 60 applications from various charities and volunteer groups on the Island. Following a selection process 24 groups made the final shortlist with three from each of the eight categories being considered.

Mike Bulpitt, Chief Executive of Community Action IW welcomed guests to the Award Ceremony, hosted by the Riverside Centre, Newport and sponsored by My Life A Full Life (MLAFL).

With eight years involvement with Community Action, President Patricia Partridge referred to the ceremony as being a celebration of all that is good on the Island- she mentioned that life would be harder on the Island without volunteers and voluntary organisations.

Patricia stated that a number of past winners had gone on to be awarded the Queen’s Award for Voluntary Service with most recent winners being Shanklin Theatre, Ryde Heritage and Brading Roman Villa.

This year’s team of judges, Patricia Partridge, Mike Bulpitt and Nicola Longson from MLAFL had travelled around the Island meeting with the various groups and looking at the diverse projects.

In the Healthy Lives category, sponsored by MLAFL Seahorse Art Studio in Freshwater, which has over 100 users many with learning disabilities, was chosen as the winner.

For the Sport section (sponsored by Glanvilles) Love Running got the nod. Some 328 had signed up for running with about 100 turning out each week for the Tuesday evening runs.

Arts and Heritage (sponsored by Morris Crocker, Chartered Accountants) saw Shanklin Town Brass Band take the title. With the modern version of the town band re-formed in 1993 they not only teach young people to play instruments but look after the Chalet in Rylstone Gardens, Shanklin which is their headquarters.

Ryde Arena was the winner of the Village Halls/Community Buildings class sponsored by Norris & Fisher Insurance Brokers, who specialise in insurance cover for such buildings. Ryde Arena has been set up as a community trust with 25 volunteers and by having the trust the paid jobs of those who work there have been saved  as  well as re-opening the venue.

Appropriately, the IW AONB sponsored the Environment section. Plant Positive was successful for their work to eradicate the invasive Himalayan Balsam. Volunteers spent over 1600 working hours on the banks of some of the Island’s rivers and streams clearing 224 tons of the weed which chokes the water flow.

Older People (sponsored by Island Health Care) saw the Alzheimer Cafes IW worthy winners. With a team of 50 volunteers they provide seven venues across the Island where those with Alzheimer’s and their relatives can seek advice and meet those with similar conditions as well as enjoying entertainment and teas.

Founded in 2012, Daisy Chains IW was judged winners in the Children and Young People grouping. This category was sponsored by the IW Community Fund.  Daisy Chains support children with life limiting illnesses and conditions.  Travel costs are especially supported and the charity also runs a Kids Cafe in Sandown, where information and advice can be found.

Local Communities, sponsored by the IW Council, was won by the Needles Coastwatch team. Set up in 2012 they operate 365 days a year (yes they even have a sturdy volunteer for Christmas Day). When judging took place at this venue the judges had to climb a 14foot ladder with the ladies advised to wear trousers! This Award was presented by Cllr. Charles Chapman, Chairman IW Council.

Each year the judging panel select an outstanding individual for the Judges Special Award. For “Many, many years service” to athletics on the Island the recipient was Ray Scovell, who masterminds the Medina IW Parkrun. 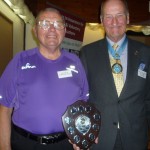 At the Community Awards Parkrun were runners up in the Healthy Lives group. Ray began with Ryde Harriers, where he competed in Marathons and half-Marathons. About 25 years ago he founded the IW Athletic Club and five years ago became involved with Parkrun. Now they have 3,010 runners registered for their Saturday morning outings with 297 competitors the record number they reached in one week’s run.

When all entries were considered for the major overall title, the Needles Coastwatch (pictured below)team were runners up 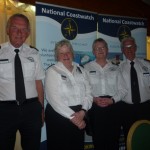 with Alzheimer Cafes IW (pictured at start of item) taking the honours. This Award was presented by the Lord Lieutenant.

Martin White, Lord Lieutenant of the Isle of Wight paid tribute to the Voluntary Sector on the Island. Without them, our communities would not survive he observed and said that every year new groups are set up. He congratulated Ray Scovell and the team from Alzheimer Cafes IW and thanked the judges and the team from Community Action IW who organise the event.