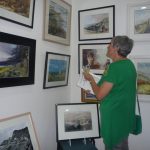 Ventnor Botanic Garden is hosting an exhibition of the works of Isle of Wight artists and photographers depicting landscapes and seascapes in the East Wight, until 27th May.

Organised by Robin McInnes OBE FRSA it features 75 examples of how the landscape, environmental and social changes over a period of more than200 years have developed.

Supported by the Heritage Lottery Fund ‘Down to the Coast’ is being delivered by the IW Area of Outstanding Natural Beauty (AONB) Partnership. This particular project is based on the vistas and panoramas seen in East Wight, which accounts for about half of the Island’s geographical area.

In fact, in excess of 80% of the landscape of East Wight is designated as an AONB. Part of The Undercliff coastline is also designated as ‘Heritage Coast’.

‘Down to the Coast’ is a project about the landscapes made by the rivers in East Wight. This area contains chalk downs and the largest area of fresh water wetland on the Island. Its woodlands provide a good habitat for red squirrels and dormice and water birds while water vole thrive here without predatory mink.

Under the banner of the East Wight Landscape Partnership the five year scheme commenced in Autumn 2015.

In conjunction with this project various art and photographic competitions have been running over the last few months with artists and photographers depicting the landscapes and seascapes of East Wight.  Winners of these competitions were presented with their prizes at the opening of the exhibition which is being housed in the VBG gallery.

Winner of the Art Competition was Alex Williams with two, oil on canvas, works: ‘Bembridge from Culver Down’ and ‘Sandown Bay from Culver Down’. ‘The Undercliff’ was the title of the winning photograph by Gianpaolo M. Giancovich. Children from three schools were invited to undertake the children’s painting competition and winners were: Madeleine Hemper  & Caris Harrison (St Helens), Elyna Pearce & Honey Bateman (The Bay) and Jess Lucas & Bailey Sard (Ventnor).