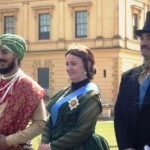 A ‘Must Visit’ event took place at Osborne House during the Half-Term holiday. Entitled Victoria’s  Fabulous Fete, visitors were carried back to the early years of Queen Victoria’s reign. In 1854 the young Duleep Singh, the Last Maharaja of the Sikh Empire arrived in England.  Queen Victoria invited him to stay with her at Osborne and he quickly became part of family life there.  He spent time playing with the Royal children, the Queen had his portrait painted by one of her favourite artists Winterhalter and even sketched him herself.  A marble bust of Duleep Singh along with paintings of him and his family, remain in the Indian wing at Osborne today.

Of course Osborne House itself played an important part in the visitors day and of special interest was the recently refurbished Durbar Room. Now arranged as a dining room the very long table is set for a banquet with each place setting having fine china, sparkling silverware and five drinking glasses. Decorating the table are pineapples- newly arrived in Victorian England from hotter climates.

In addition to all the activities for children and adults alike at the fete there was the chance to buy some gifts which had been produced on the Isle of Wight. Included in this selection were Isle of Wight Fudge with, for the person who must try a new flavour-Wight Avalanche-a delightful mixture of white fudge and marshmallow inspired by the son of Richard the IW Fudge Man. 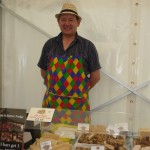 Also available were different flavours of Tipsy Wight Vodka. All these Vodka based drinks are infused with flavours from the Island including honey from the bees which surround the Vodka bottling plant. With attractive ‘Tipsy’ bottles this local product offers a selection of flavoured Vodkas including hedgerow, plum and for those who like something hotter-chilli. 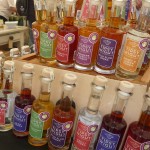 Although the Fete was held over a three day period there were plenty of visitors on all days and these special events at Osborne are always well produced. Look out for the next special event and enjoy a visit to Queen Victoria’s House by the sea.