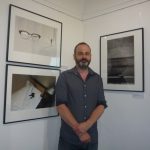 Since 1995 amateur photographer Andy Hollingworth has pursued his passion for capturing comedians on film and more recently in digital form.

Now, some of his renowned photographs feature in a major exhibition at Dimbola Galleries in Freshwater. Entitled ‘In stitches- Comedy Portraits’ the collection is on the Island thanks to Dr. Brian Hinton MBE viewing Andy’s work at Snap Gallery, Piccadilly.

Born in Holmfirth, Yorkshire famous for the setting for ‘Last of the Summer Wine’ Andy now lives in Chester. His day job is teaching at a local Junior school.

Most of his output consists of black and white prints and he admitted to being a late convert to digital cameras.

Andy’s prodigious output over two decades consists of images captured in a photographic studio, on location or during appearances in comedy clubs, TV shows or on stadium tours.

Among the portraits to be seen at Dimbola are those featuring Island born Phil Jupitus, Johnny Vegas, Rowan Atkinson, Bill Bailey (on Stage), Harry Hill and the late Rik Mayall.

Andy also documents items associated with comedy like Norman Wisdom’s suit and the Trotters’ Reliant Van. His exhibition can be seen at Dimbola until 9th October and is well worth a visit.

A second photographic collection features a series of images captured by Island resident Zoe Barker. Called ‘Saba-The Rust of Time’, this exhibition explores the patina of life that can be seen all around us every day.

Zoe’s collection of photographs include:

Lord Digby’s school in Dorset -Zoe’s old secondary school. When it closed in 1992 she gained access to record the building inside prior to its demolition.

In 2015 Zoe was afforded the opportunity to photograph the interior of Osborne House Convalescent Home for Officers which was situated within the Osborne Estate at East Cowes.

A property in West Street, Ryde was Ronald Woodward’s home from the 1960s until his death in 2015.

Also in Ryde, a property in Monkton Street the home of two sisters.  Jean was born there in 1916 followed by the birth of Joy in1922. They lived there for most of their lives.

Zoe’s images were described as, “photography as an art form” by Dr. Brian Hinton MBE Chairman of the Trustees of Dimbola and again worth a visit to Dimbola.