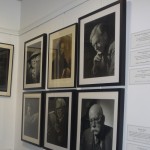 Having been stored in a Winchester farmhouse for forty years, the photographic archive of Austrian born Lotte Meitner-Graf (1899-1973) can be seen for the first time for many years at Dimbola Museum and Galleries, Freshwater.

Although Lotte was unconventional and uncompromising, she never courted publicity, neither did she seek to gain from her art commercially.

Lotte set up her photography studio in Vienna initially before relocating to London in the 1930s. In 2014 work began to catalogue some of the 3,000+ examples of her work.

This exhibition of black and white portraits is a treasure trove of celebrities of the day. Seen rarely by the public, some of the photographs featured in a low key show at the private Garrick Club some years ago.

Two of the subjects, actor John Laurie and musician Yehudi Menuhin were actually members of the Garrick Club. This exhibition was co-ordinated by photographer Tony Barrett with valuable input by Dimbola curator Dr. Rachel Tait and Dimbola warden John Walker with Lotte’s photographs being compare to those taken by Julia Margaret Cameron.

Also being shown at Dimbola at this time is an exhibition, based on his two Grandfathers, from Manchester based John Brewer who calls himself the Victorian Photographer. Utilising the 19th century technique known as wetplate collodion he has featured the skills and interests that made the two men who they were. 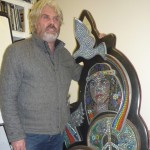 Alongside the two new exhibitions, portraits by Lotte Meitner-Graf and ‘In Search of Lost Time’ by John Brewer, at Dimbola, Freshwater ,which will be staged until July, the permanent exhibition on the history of the IW Festivals has had an up-date.

Dr. Brian Hinton MBE said that Dimbola Museum and Galleries had received a grant from Solo, organisers of the IW Festival, enabling some special projects to take place. These had been agreed with John Giddings and include extending the IW Festival exhibition and enabling research to take place on the Victorian wall coverings with a view to covering some of the walls in rooms at Dimbola with copies of original designs.

Sculptor Guy Portelli was a guest at the launch of Lotte’s portraits and whilst in Freshwater was arranging the display of a new piece of his work to be in the IW Festival archive.

Based in Tonbridge Guy said his work based on Melanie which has been in the exhibition for some time was to be replaced by a new work based on Jeff Beck. Whereas singer Melanie’s sculpture had been based on a bicycle theme Guy’s take on guitarist Jeff Beck involves cars, a passion of the musician.