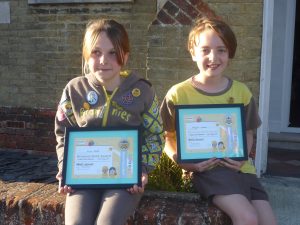 Two Brownies from the East Cowes Unit are thought to be the first two girls on the Isle of Wight to achieve the recently introduced Girlguiding ‘Gold’ Award. With the introduction of Girlguiding’s New Programme all sections, Rainbows, Brownies, Guides and Rangers have a ‘Gold’ Award to aim for.

Brownies earn Theme Awards and when all six Theme Awards are completed, they are very close to achieving the Brownie Gold award. This is really special and gives Brownies the opportunity to put everything they have learned into practice by doing something for Brownie friends before they move on to new adventures. To get a Brownie Gold award they earn all 6 Theme awards and then do a final challenge. The six themes are: Taking Action, Skills for my Future, Know myself, Express myself, Be Well and Have adventures.

Abigail Curran (10) (R in photo) said, “During my three years as a Brownie I really enjoyed the World Thinking Day celebrations each year when Brownies have the chance of meeting girls from other areas and making new friends. I have recently completed my Performance Badge, but I particularly enjoyed the Space Badge which included designing a training programme for an astronaut. I am really into Outer-Space and want to be an astronaut. We always get out and about with Brownies.”

Fellow Brownie Keira Wells (10) said, “I have really liked going to camp and I am looking forward to doing more camping when I am a Guide. Brownies is a great thing to belong to. Recently I have completed my Zero Waste Badge which taught me about the environment and how to look after Planet Earth.”

Both Abigail and Keira are now joining Guides and are looking forward to an All Island Camp later this year.
Brown Owl of East Cowes Brownies Katie Charlton said that the two Brownies had worked very hard on their Gold Awards and several more girls in this unit should achieve their Gold Awards too in the very near future.

After the presentations all the Brownies in the unit and invited guests enjoyed a celebration cake. 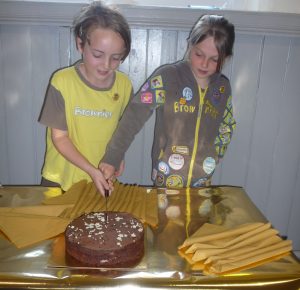