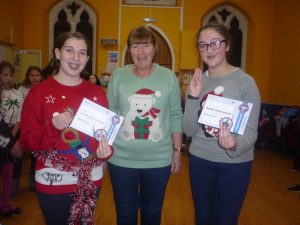 Two members of 1st Carisbrooke (Princess Beatrice’s Own) Guides have gained their Girlguiding Gold Awards. These new awards were introduced last year with Girlguiding’s New Programme and cover an array of skills across the programme’s sections.
Caitlin Cross (L) and Tessa Bryson both 13 had already undertaken Girlguiding’s Baden Powell Award which was the highest award any Guide could gain under the previous badge system so perhaps it was no surprise that the challenge of the new Gold Awards would be undertaken.
Both girls have been members of Girlguiding for some years having been Brownies before joining Guides. As a special task for their Gold Awards they researched Rangers, another Girlguiding Section, and gave a presentation to other members. Interest badges were worked on including Confectionery which involved the popular sweet making and another chosen interest badge was Fitness.
Outdoor skills were learned including camping and outdoor cooking skills whilst competing in a cooking competition. Then there was kayaking and Mermaid Swimming with the Guides swimming whilst wearing long Mermaid Tails!
Presentation were made at the Guides’ Christmas party by Guide Leader Linda Stone with Certificates and badges being handed out.
Tessa said, “I have really enjoyed undertaking all the tasks for the Gold Award and following the research into Rangers I have decided to join Rangers.” Caitlin added, “Swimming with the Mermaid Tails was difficult but fun and I really enjoyed making the sweets.”