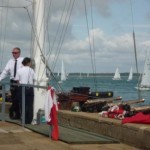 Celebrations to commemorate the Royal Yacht Squadron’s Bicentenary International Regatta in Cowes are now getting nearer.

For some of the competing yachts, preparation is even more frantic than for others as
these yachts are getting ready for the Transatlantic Race which starts in less than two months from Newport RI, before heading for the UK for the celebrations in Cowes.

Amongst those going the extra few miles to be in the line-up, when the regatta celebrating the club’s 200 years starts on 25th July, are the beautiful S&S ketch Dorade built in 1930, McCurdy & Rhodes 48′ Carina and Swan 57 Noonmark V. None of the three are any stranger to long distance racing. In fact despite being a lady of a certain age, Dorade carries her 39ft waterline length, 53ft overall, to ever new achievements. 2015 will see her take part in another Transatlantic Race and another Fastnet Race – just as she did both in 1931.

From Newport RI to Cowes is a long way but, along with the rest of the now nearly 70 strong fleet, it will be worth being part of the dramatic line up of modern, ultramodern and vintage yachts including four of the magnificent J Class, vying on the Solent start line in front of the Royal Yacht Squadron Castle which dominates the water’s edge at Cowes.

Après sail activity will not disappoint for those attending either with the Grand Party taking place on Thursday July 30th at Queen Victoria’s historic home, Osborne House. An aerial display from the Air Squadron will enthral the party guests who will enjoy a dinner, dancing and entertainment from Jay Miller’s Circus along with funfair attractions.