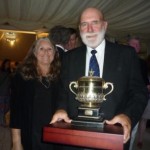 All the yachts encountered such varying weather conditions, strong wind, rough seas, calm seas, heavy rain, fog and tropical heat but as these sailors do, they raced on across the Atlantic Ocean with every day taking them nearer the finish of the race at Lizard Point.

Thursday, July 9th saw a change in the three-way battle to be first home in the Transatlantic Race 2015 with Bryon Ehrhart’s Lucky taking the lead on the water by finally passing the giant schooner, Mariette of 1915, a vessel twice the size of Lucky but some 93 years her senior.
To avoid a patch of light or no winds hovering around the Isles of Scilly/Land’s End the three lead boats took varying courses. Lucky appeared bound for southern Ireland rather than southern England whilst Mariette of 1915 and Nomad IV chose to close from astern in strong wind ahead of a cold front.
With yet another change in weather conditions Nomad IV encountered thick fog. Clarke Murphy on board Nomad IV recounted: “I was at the wheel in pea-soup fog, no visibility, going 15 knots. All of a sudden I see, 10 metres off the bow, a huge breaching whale and I scream ‘whale’ — I have hit whales before in previous trips. So I shoved the wheel to windward and we passed two to three metres by a floating 40-foot container covered in barnacles on the port side. We were so close, you could see its registration number!”
Late afternoon British time on Friday July 10th and Lucky was the first boat to cross the finish line at The Lizard, ending a brutal 8 days 22 hours 5 minutes and 3 seconds at sea on a 2,800-mile eastbound crossing of the North Atlantic, sailed mostly in strong winds.
“We are excited to have finished; it was an interesting test,” said Bryon Ehrhart, who earlier this year acquired his Reichel/Pugh 63 (formerly the 2011 Rolex Sydney Hobart winner, Loki) with the principle aim of competing in this race.
When Lucky crossed the line Nomad IV still had 37 miles to sail in a dying breeze. Nonetheless it was close after more than 3,000 miles of racing—in distance sailed—considering the two boats are so different. Lucky is a 63’ long stripped out racer; Nomad IV, at 100’, a much bigger boat but fitted out with a luxury interior, and also having suffered a catalogue of problems on this race including that ‘whale’ and having to sail for all but the first two days without the hydraulics vital for most of her sail controls.
After their exciting battles Nomad IV crossed the line in second place followed by long-time race leader Mariette of 1915. Mariette led the fleet east across the North Atlantic for the majority of the race, during which time the crew cranked the 165 ton gaff schooner up to a top speed of 17.8 knots.
Back to the fleet; in stark contrast to two days spent wallowing in no wind last week, a corridor of strong south-westerly winds straddling the breadth of the North Atlantic for 48 hours provided last Sunday’s starters with conditions to cover huge mileage.
A boat built exactly for this is Jim Clark and Kristy Hinze-Clark’s VPLP Verdier designed 100-foot maxi Comanche, which has now broken the monohull 24-hour distance record. In a 24 hour period, Comanche covered 618.01 nautical miles (or 25.75 knots average); however, it is important to note that this is subject to ratification by the World Sailing Speed Record Council.
German boats were fourth and fifth home on the water in the Transatlantic Race. Outsider crossed the finish line followed by Stella Nova. Sixth over the line was the Open 60 Grey Power, skippered by 76-year-old Sir Robin Knox-Johnston, who in 1969 became the first man to sail solo non-stop around the world. According to Sir Robin this is his 24th transatlantic crossing and hopefully there will be a few more to come. “I’m pleased to have beaten 11 days” he said.
Several of the finishers, on crossing the line at the Lizard, then joined in a coastal race to Cowes where la they joined in the RYS International Regatta.
“Being back in Cowes is a very emotional moment for me,” said Tilmar Hansen from Outsider. “We have very nice memories from 1983 and 1985 with our [victorious] German (then West Germany) Champagne Mumm Admiral’s Cup campaigns with Outsider.”