At a special event hosted by travel broadcaster and travel editor of the Independent newspaper Simon Calder and held at the Grand Hotel in Brighton, Isle of Wight tourism businesses have been recognised for their excellence at The Beautiful South Awards.
Will Myles, Managing Director at Visit Isle of Wight collected a bronze award for Tourism Event/Festival of the Year on behalf of Robin Hill. Will congratulated all the Island’s winners saying, “Well done to all of our award winners and all of the people who have actually put forward their companies, organisations and businesses for these awards. It’s an amazing thing that we’ve done, an amazing thing that the businesses have done and it’s an amazing thing that the Isle of Wight has done. Well done to absolutely everyone involved”.
Three gold awards, two silver awards, three bronze awards, and two commendations went to Isle of Wight businesses across a range of tourism-related activities.
The three Golds were awarded to Monkey Haven, Lorry Middleton from Hovertravel and Tom’s Eco Lodge.
The gold award for the Small Visitor Attraction of the Year went to Monkey Haven, an award they previously won in 2016. They were also commended in the Ethical, Responsible and Sustainable Tourism category. Kelly Wickes, a manager at Monkey Haven spoke of the team effort at the charity and attraction.
Girlguiding SW England chose Monkey Haven for one of their Region Roadshows when hundreds of girls and leaders from across the Region enjoyed a day with all the animals and birds as well as activities organised by the Girlguiding SWE Region team. 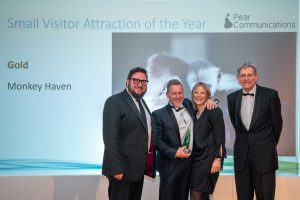 Lorry Middleton from Hovertravel picked up the gold award for Customer Service. Lorry said,’ I’m just a small cog who has got an amazing award for customer service, but it’s thanks to the team and everyone’s hard work at Hovertravel that’s allowed me to have this award.’
This award means that Lorry will automatically be put forward for the national Tourism Superstar Awards run by the Mirror and Visit England.
Tom’s Eco Lodge, near Yarmouth took home the gold award for the Glamping and Alternative Camping section. Tom Turney of Tom’s Eco Lodge thanked his team for their work: ‘It’s amazing. To win it for a second year in a row just shows how much of an amazing team we have at the farm. Chloe, Joe and the whole team are incredible, and this just shows how we won and why we won it, it’s through their amazing efforts really.’
Other awards: Bronze Self -catering accommodation – The Mill House, Brighstone.
Silver Wedding Venue of the Year – East Afton Farmhouse, Yarmouth.
Highly Commended in Access and Inclusivity – Hovertravel
Bronze Glamping and Alternative accommodation – Sibbecks Farm Glamping
Silver Camping and Holiday park – Whitecliff Bay Holiday Park.
Highly Commended Tourism event/festival of the year – Terror Island.