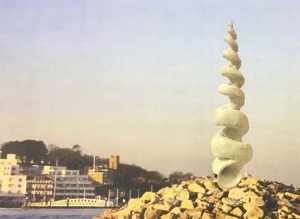 Winning entry-Sound of the Sea.

In September 2018 Girlguiding IW members along with school students were invited to enter an Art Competition organised by Cowes Harbour Commission.

A sculpture design inspired by the Isle of Wight’s seaside heritage, natural beauty and the seascape and shore sculptures of the great 20th century British sculptor, Dame Barbara Hepworth has won this competition and will be placed on the Cowes Breakwater.

An impressive 29 entries were received from four schools and home-taught students.  Sound of the Sea, designed and named by Year 9 GCSE Art & Design student Ada Kohlmaier-Sims of The Island Free School was considered “an elegant and eloquent response to the brief” and declared the winner.

The judges were chosen for their landscape design, artistic, maritime and local knowledge and all have strong associations with the Island. Joining Cowes Harbour Master, Capt. Stuart McIntosh, were Alan Titchmarsh MBE, whose most highly publicised recent landscaping projects were a response to his Yorkshire heritage and Island life; international award-winning sculptor and Member of the Royal Society of Sculptors Louise Giblin who grew up on the Island and regularly visits family and to ‘recharge her creative batteries’; and Paul Armfield, former Head of Quay Arts, whose understanding of local historical and creative matters proved invaluable in translating the references in some of the more complex designs.

The Cowes Harbour Commission (CHC) competition called for a theoretical response; a design idea of a sculpture that could welcome seaborne visitors to Cowes and that would reflect its sailing traditions, maritime industry and the natural coastal environment. The panel concurred that all of the entrants were to be congratulated. The students had explored ideas, considered the work of other artists, used technology to project their design and there were several 3D responses that could be illuminated at night.

CHC devised the community competition to reward creativity, to publicise the Commission’s work and to encourage entrants to consider and celebrate their Island home; all of which have been rewarded by the students’ great response. That the winning entry could potentially lend itself to being redesigned into a viable, semi-permanent or permanent marine sculpture has been an incredibly positive outcome. Any realisation of such a project in the future would take account of responses from the local community and funding considerations.

Competition entries will be on display at Cowes Harbour Office, Town Quay from 11th-22nd February (Monday to Friday, 0900-1700) and award winners will be presented with their prizes and meet the judges at an  (invitation only) event to be held in Cowes in March. Second and third place prizes have been awarded to Aaron Edmunds-Lamb of The Island Free School, and Marcus Kendall of Cowes Enterprise College. Also highly commended were Millie Troy and Kate Murray- Smith, also from The Island Free School, and a joint entry from Joe Gregory, Oliver Cooper and Luke Wright of The Isle of Wight Studio School. All entrants will receive a certificate.