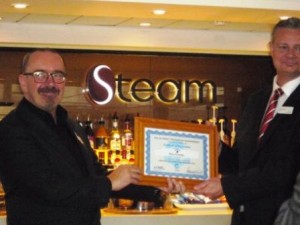 Kevin George, Chief Executive of Red Funnel said that Red Funnel’s business was all about the Isle of Wight. Their aim was to make travel to the Island an affordable link and recently the ferry operator had added additional sailings and tweaked some timings to fit in with other transport. Red Funnel had also taken on the running of the City Link bus service in Southampton which enables passengers to reach Southampton Central Railway Station easily.
Red Funnel had reached a significant milestone with £5million invested into its fleet. As well as major refurbishments for Red Falcon and Red Osprey there had been interior upgrades for Red Jets 3 and 4.Within the next two years Red Jet 5 would be replaced by a new, more cost-efficient vessel.
There were plans to give the company’s third car ferry, Red Eagle, a similar makeover as Falcon and Osprey. However, as Red Eagle had a slightly different configuration Naval Architects had been employed to undertake a feasibility study.
In early 2017 it was hoped that the Southampton Terminal would be relocated in order to consolidate the car ferry and the Red Jet terminals in the same location.
There would also be relocation, after planning permission, of the East Cowes Terminal which would see it double in size to accommodate both the car ferry and Red Jets. However, the Red Jets would still serve Cowes.
David Thornton, CEO of ‘Visit Isle of Wight’ said that Red Funnel was symbiotically linked to the Island. Their major investment brought a better experience for its customers.
Mr Thornton had great pleasure in handing over a Key Destination Award- the first ever to be awarded by ‘Visit Isle of Wight’- to Kevin George thus showing how Red Funnel’s investment and commitment to the Island is appreciated.
On 26thMarch Island producers and holiday venues and attractions were on show to Red Funnel passengers when a number of Island providers staged an Open Day. Housed in a large marquee alongside the car ferry terminal in Southampton there was much interest in Island produced goods as well as interest in venues and Island attractions.
Amongst those in attendance were Island Ales/Island Brewery, Twins (gluten free food), Goddards, IW Steam Railway, Dinosaur Isle, Island Roasted, English Heritage and Isle of Wight Cheese. Providing entertainment for children was that demon chicken from Robin Hill and dinosaurs from Blackgang Chine.
Also available to visitors at the Open Day were samples of the new food range available on Red Funnel car ferries including a selection of muffins and cakes. In a recent innovation Red Funnel offer an Afternoon Tea Cruise which features the triple-decker cream scone. It is hoped that soon a Sunday Lunch Cruise featuring a carvery will be introduced where passengers will be able to enjoy the passing scenery as well as the freshly cooked meal.
Some visitors to the Open Day undertook free trips on a Red Jet and around 1,000 people enjoyed cruises on Red Osprey when the ship cruised in the Solent and passengers were given a close-up view of the US Aircraft Carrier ‘Theodore Roosevelt’ which was anchored off Stokes Bay.