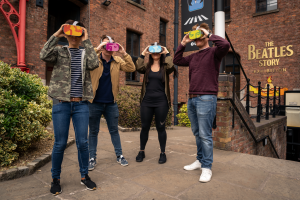 With this year’s IW Festival theme of “Summer of ‘69 – Peace and Love” fans can be in their ‘60s best in celebration of the 1969 festival.
IW Festival organisers have now revealed the exciting news that it has teamed up with The Beatles Story, Liverpool to premiere their immersive virtual reality experience dedicated to The Beatles. “Become The Beatles” and this will allow fans the opportunity to learn more about the Fab Four and witness Beatlemania through the eyes of John, Paul, George and Ringo.

Back in 1969, before that year’s IW festival,  headliner Bob Dylan and his fellow Woodstock residents, The Band, rehearsed at Forelands Farm in Bembridge, and were joined there by George Harrison, the only “outsider” to have visited him at his enclave in the Catskill Mountains. On Saturday, 30 August, the day before Dylan was to take the stage, Harrison’s fellow Beatles John Lennon and Ringo Starr arrived on the island ready to see Dylan.

Available across the Festival weekend (13th – 16th June 2019) for everyone to enjoy, the unique experience will be located in Strawberry Fields, near to where the Girlguiding IW stand will be based, and will give music fans the chance to be immersed in the heady days of the World’s greatest band, virtually performing ‘Twist and Shout’ live in front of screaming fans on stage, in The Beatles Story’s own recreation of the world-famous Cavern Club.
Diane Glover, Marketing Manager at The Beatles Story, said: “We are very excited to be launching our new virtual reality experience at this year’s Isle of Wight Festival on the anniversary of The Beatles’ visit there in the summer of ’69. What better way to celebrate this occasion by giving festival-goers the chance to virtually become one of The Beatles, playing to an audience of adoring fans on our award-winning attraction’s replica Cavern Stage.”