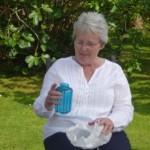 Members of the IW Executive of Girlguiding IW recently gathered at the home of the President Patricia Partridge to thank Island Commissioner Janet Lovell for her work and dedication during her almost 5 year term of office.

Janet has seen Girlguiding on the Island change from being run in Districts to being run in Sections. Due to lack of leaders wishing to take on the role of District Commissioner a change was necessary and this, after a trial period, has now been put in place with each of the four Sections of Girlguiding-Rainbows, Brownies, Guides and Senior Section having its own Commissioner/s.

Janet began her term of office in September 2009 at the start of Girlguiding’s Centenary and over the ensuing years dozens of special events as well as the weekly meetings of units have taken place.

At the presentation Deborah Meadows, who has taken on the role as interim Island Commissioner, paid tribute to Janet and thanked Martin Lovell for his support over the years.