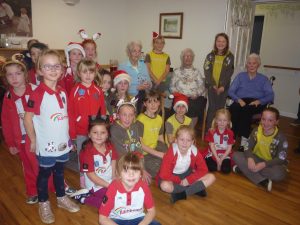 Across the Island most units of Girlguiidng IW have been undertaking special activities within their communities with Christmas in mind. Many girls will be delivering hand-made Christmas gifts to Island residents whilst others have been singing or helping other charities.

Rainbows and Brownies from Wootton together with Girlguiding leaders paid a visit to an elderly residents’ care home in Havenstreet.

Christmas came a little early for the girls and the residents when the Rainbows and Brownies presented Christmas through the Alphabet with Christmas songs and Carols. 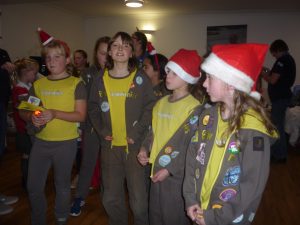 Following this presentation all the girls spoke with the residents whilst enjoying refreshments and every resident was given a small Christmas gift hand-made by the Rainbows and Brownies.

This event was organised by Girlguiding IW leaders from the Wootton units. All the residents were very pleased to see members of the younger generation whose presentation was greatly appreciated. 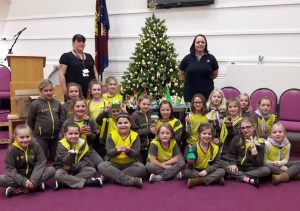 All the Brownies then decided to make the table decorations and enjoyed making reindeer, Christmas trees, snowflakes and candles as well as asking if they would be able to give them over to the Salvation Army in Pyle Street, Newport personally.

One Brownie make a glass decoration at home. It was decorated with hearts and words such as respect, love, care, kindness. Receiving the decorations on behalf of the Salvation Army was Kay Willett. 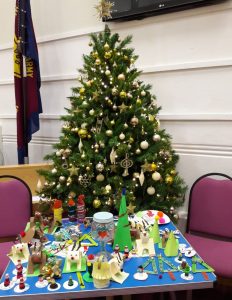 After delivering the decorations Brownie Summer-Daisy Cox (7) said,” It would be nice for everyone that doesn’t have a home to be able to go to the lunch.” whilst Holly Hinkley (8) added, “Everyone deserves a Christmas and I hope our decorations help to make theirs better.”