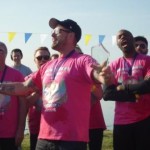 Newport based Connor Construction currently undertaking a project at Island Harbour were flying the flag for the Island along with other teams which included team members from Island businesses including Island Roads.

Another entrant was Red Funnel with a team drawn from office and ferry staff based in Southampton as well as the two ferry terminals on the Island. Each team could field a squad of between 11 and 17including the obligatory drummer.

Island Marquees were tasked with providing a mini tented village along the banks of the River Medina for teams and sponsors to relax in between races.

Main task of the day was to raise funds for ‘Well Child’ the national charity for children. Funds enable children, who are well enough, to leave hospitals and be cared for at home. Caroline Giddings, wife of John the IW Festival promoter, chose the charity to be supported.

Founded in 1977, as ‘Kidney’ the charity’s name was changed to ‘Well Child’ in 2003 when children other than those with kidney conditions were also cared for. It now has Prince Harry as its Patron. Nurses now look after children in their home environment with one such nurse being based in Southampton.

On the day the IW Festival Dragon Boat Race raised £50K for ‘Well Child’ a sum which funds one nurse for a year.

At the end of the afternoon four teams lined up for the Grand Final. Close racing ensued, with each team taking just over one minute to complete the course set on the River Medina.

Booze Crewz and Air Partners just missed out on the honours but Team Wight Lightning just pipped local team Connor Construction and came out as champions.

Identical dragon Boats were supplied by Oarsome Outdoors, which also had a racing team which included GB rower Oliver Hester.