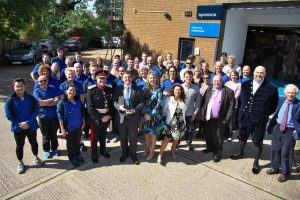 Spinlock, designers and manufacturers of rope holding equipment and personal safety products for leisure and commercial water users, have been presented with the Queen’s Award for Enterprise Innovation at their production facility in Cowes.

This Cowes-based business, founded in 1968, was announced as winner of the coveted award in April 2017 and the Isle of Wight’s Lord-Lieutenant Major General Martin White CB CBE JP presented the award at a special ceremony on Tuesday September 12th.

Spinlock was selected as a winner for the development of their Deckvest lifejacket, a revolutionary product that has changed the landscape of the market for personal safety products used by those on the water.

Spinlock CEO Chris Hill said: “We are delighted to have been given this prestigious award in recognition of the Deckvest. The impact of the product is far reaching, as the sustained demand for it has enabled us to expand our workforce and we are now exporting to 25 countries.”

The Lord-Lieutenant was welcomed to the production facility by Spinlock’s CEO Chris Hill, along with High Sheriff Ben Rouse, Local Councillors Lora Peacey-Wilcox and Paul Fuller, who is also Cowes Town Mayor.

Bob Seely, the Isle of Wight’s MP, sent his congratulations to Spinlock which said: “I am delighted that an Isle of Wight company has received this prestigious award for business excellence. This is just the sort of company the Island needs to encourage and nurture. I congratulate the Spinlock team for leading the way in innovative product development and I look forward to visiting them soon.”

Spinlock staff enjoyed the presentation followed by celebrations held at their production facility in Cowes and a party was held afterwards to thank the whole team for their contribution.

Caroline Senior, Spinlock’s Director of Operations, commented: “It is great to be able to share the occasion with the whole team in celebration of our Queen’s Award for Enterprise Innovation. Our thanks go to the whole team for their continued hard work.”

This is the second Queen’s Award Spinlock have won, having been presented with the Queen’s Award for Enterprise International Trade in 2016 by the Duke of Edinburgh.

Chris Hill added: “2017 has been another successful year for Spinlock and it is testament to our dedicated workforce that we can design, market and deliver products to meet the ever-growing demand across the globe.”