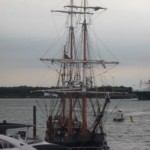 Also moored in the Boat Show Marina was the J109 ‘Red Arrow’, owned and operated by the RAF Sailing Association. This yacht has had a busy campaign this year having taken part in the JPMAM Round the Island Race and the Rolex Fastnet Race which both started off Cowes.
In conjunction with the appearance of ‘Red Arrow’ Saturday saw a show stopping performance from the RAF Aerobatic Display Team-better known as ‘The Red Arrows’. In their 50th Anniversary Year there were spectators all over the city, as well as at the show, to see a unique show by the nine ace pilots in their Hawk T1 jets. 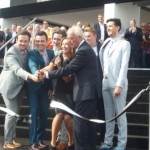 Based in Poole, Sunseeker International recently sold its 100th 100 foot motor yacht. To open the Sunseeker stand Suzi Perry, from BBC’s Formula One, introduced ‘Collabro’, winners of ‘Britain’s Got Talent’. Carrying on the British talent theme Sunseeker had a number of iconic items on display including portraits of HM The Queen by David Bailey CBE which he had taken over the years. Other British items included a hand blown Cleaves Bowl featuring the emblems of the four British countries in sterling silver gilt and vitreous enamel, a fibreglass Paddington Bear designed by Stephen Fry 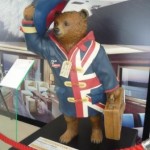 and a dress designed by Nicholas Oakwell involving 2320 hours of work and incorporating 65,000 Ostrich feathers.

Former title sponsor of the Show, PSP Logistics has a base in Cowes. At present they are sponsoring a yacht in the 2015/16 Clipper Race and were pleased to announce an expansion of their company with a new base planned for Poole.

Formally a PT instructor in the Army, where he met GB athlete Kris Akabusi, Stephen Lees was giving demonstrations of his marine paintings. Using acrylic paint he paints directly onto canvas in one evolving sequence. While the background paint is still wet he adds details with fluidity of lines and shapes using a mini-trowel, which he then cleans on his t-shirt! 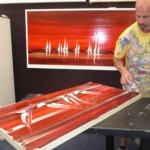 There was much interest in the inaugural ‘Sailing Today’ Awards. In total there were 15 categories including Sailor of the Year. This award, sponsored by Wight Vodka was presented to Sir Robin Knox-Johnston. Henri Lloyd’s Elite Jacket was accorded the Clothing Innovation Award with Paul Strzelecki, CEO of Henri Lloyd, receiving the trophy 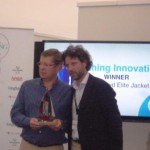 whilst The Royal Southern Yacht Club, one of the organising clubs for Cowes Week, gained the Yacht Club honour. Over the last year the average age of members of RSYC has fallen from 50 to 40. Their new facility was officially opened by HRH Prince Philip this summer.

Sunsail, one of the main providers of yachts for those who do not have their own boat but who wish to compete in Cowes Week, once again had a link up with Chilgrove Gin the official Gin of Cowes Week and the only Gin in the UK made from grapes.

Launching at the show were Marine eGift Cards a new and convenient was of getting marine products and services to your family and friends. Often getting the correct product or present for the boat owner is an impossible task. By using Marine eGift Cards the problem is solved. You pay for a card, select a personal message for the recipient and they receive an eGift Card code which enables them to choose a gift from the website of one of eGift’s partners.

It is always good to support Island businesses and BVD Marine from Bowcombe Business Park had a display in the Arena Area. Their Seaspray dories can be fitted out as workboats or sportsboats whilst their Coastworker boats are rugged seaworthy workboats and their microboats are unsinkable and form incredibly stable performance tenders.

With good weather at the start of the Show numbers of visitors packed into Mayflower Park and the Red Arrows display certainly proved very popular on Saturday.
This year’s Southampton Boat Show continues until Sunday 20th September.