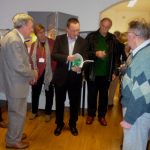 This year’s exhibition mounted by Cowes Heritage is entitled ‘The Development of Somerton Airfield’. Having previously used Regatta House in Bath Road, Cowes Media Centre off the pedestrianised High Street, is now the venue for the annual event.

One hundred years ago in 1916 J. Samuel White & Co Ltd. purchased 60 acres of land off Three Gates Road in order to build an airfield. This is now the site of BAE Systems, previously Decca and Plessey.

Somerton Aerodrome came about in 1925 and was bought by Samuel Saunders who renamed it Somerton Airport. It staged the 1929 Schneider Trophy, which was being staged for its penultimate time in that era.

A passenger service ran there between 1933 and 1936. It was the only airport on the Island to be operational throughout World War 2.

Somerton Airways Ltd. ran freight and passenger services from 1946, and in 1950 Three Gates Road was reopened with the airfield closing the next year.

Readers Lampshades were then made on the site in the 1950s, under Reg. Reader’s direction with  Woolworth  Stores  a major customer.

Decca, Plessey and BAE Systems have produced and tested World- beating Radar systems on the site. At its peak in the mid 1980s some 1400-1500 staff were employed there. Today, the workforce numbers just about 250.

David Ireland was employed in the catering side of the business and the canteen was always one of the most popular areas of the site. David had been in catering since 1952. He studied for three years at Catering College and then worked in the family hotel in Cowes before joining the then Decca in 1963.

Plessey in particular was well known for its sporting prowess. It fielded teams in football, cricket, bowls and athletics.

First organised in 1986 by the Plessey Apprentices Association an Annual Fun Run was held. Comprising a five mile course from Newport along the old railway line, now the cycle path, and finishing at Plessey Sports & Social Club it attracted a number of colourfully clad runners. There were Nuns, Busy Bees, Smurfs, Convicts and Christmas Crackers taking part all raising funds for local charities.

Colin Bell, who joined Plessey at Somerton in 1995 and transferred to Portsmouth (BAE Maritime)  three years ago, officially opened the exhibition. As a pupil at Solent School in 1979 Colin jointly won the Plessey Radar Trophy for Science and Technology with Chris Chambers. From then on it was pretty certain Colin was destined for a career in that field of science and technology and today he is a senior manager. Meanwhile Chris emigrated to New Zealand but before doing so designed the ‘Winning Winches’ which were employed onboard racing yachts.

Colin’s father was an engineering director at Plessey so there was no lack of encouragement when he was younger. At the official opening Colin related how only that day BAE Radar could be seen on news coverage of the two Royal Navy vessels escorting Russian warships on their way to Syria and he pointed out that BAE Radar equipment is a major player for the UK’s defences.

After declaring the exhibition ‘Open’ he was presented with one of Cowes Heritage’s excellent books by John Groves. Colin declared that he was a bit of a history buff and would enjoy learning more of the history of Cowes.

Recently, and bringing the history of the Somerton site up to date, a World War 2 pipemine was detonated on the site.