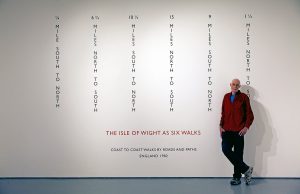 At the opening, that saw over  200 people in attendance, there were  speeches

processes  and  influences with writer and curator Les Buckingham.

Long is an artist who embarks on long distance walks to create his work. Therefore an exhibition of his work couldn’t be more perfectly placed on this ‘Garden Isle’ which has played host to some of the largest walking festivals in Europe.    The Island has long been a source of inspiration to visitors, including Long, with his 1982  text‐work created in vinyl, titled ‘The Isle of Wight as Six Walks’ from which this exhibition  takes it name.

This large text‐work on display and covers six distances, alternately north to  south and south to north, and precisely portrays the physical shape of the Island as it lies in  the sea.

Accompanying this work is one of Long’s signature pieces made in the gallery – a  bespoke ‘wall drawing’ by Long himself, using local mud from the River Medina. Constructed  through a series of marks by the artist’s hand with found, natural material, it explores  visibility and impermanence, which lies at the heart of Long’s practice.

Other works on display include photographic and text pieces as well as a monumental floor  installation made from flint, all on loan from the Southampton City Art Gallery’s collection.  They present a variety of locations, including England, Wales, Africa, Nepal and Bolivia and  span over four decades, offering a glimpse into Long’s vast artistic career.

In 1989 Long was awarded the Turner Prize for his contribution to British Art and has since  been involved in a plethora of solo and group shows world‐wide. He remains one of the  foremost practitioners of Land Art, art concerned with action within the landscape and its  human geography, art that questions the definition of art as a revered, permanent and  valuable object.

Arts during the Spring and Summer.