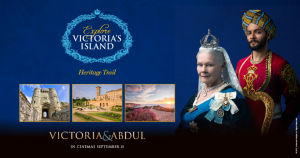 A coordinated campaign – with financial investment from Visit Isle of Wight – is making its way into national media, capitalizing on the success of the ‘Victoria & Abdul’ new movie from Universal – much of which was filmed at Osborne, the beloved East Cowes home of Queen Victoria.

Visit Isle of Wight has helped to put the Island back in to the hearts and minds of potential visitors, with coverage surrounding the film appearing in national newspapers The Times, The Daily Telegraph, The Sun and The Sunday Mirror.

With the launch of a dedicated heritage trail – Explore Victoria’s Island tis too is also attracting attention. Plus an online article from Ireland’s 2nd largest tv broadcaster (TV3) shows the continued interest generated by Visit Isle of Wight’s campaign.

Visit Britain say the value of film tourism is huge: “ Research by Visit Britain shows that films are powerful motivators for travel with more than a third of all potential visitors to Britain wanting to visit places they have seen in movies or on TV. Films also shine the spotlight on less visited but equally inspiring destinations, boosting tourism across more of Britain.”

Visit Isle of Wight CEO David Thornton said: “In 2016 when our Churchill Trail made it onto Forbes online in front of 40million worldwide viewers, we started to realise the full potential of creating trails as a way of gaining powerful exposure for the Island in new markets. For a destination like the Island, where the landscapes and attractions are essentially the same year after year, we have to create new stories for journalists to write about, or we lose valuable digital and print space to competing destinations. New trails are an extremely cost-effective way of doing this. The Victoria’s Island Trail was launched to coincide with the Victoria and Abdul movie, and has already generated coverage in the national press plus specialist publications like Coast Magazine, in Press Association blogs and regional newspapers. If we had to buy this space to promote the Island it would be way beyond our advertising budget. Here on the Island, we’ve proved time and time again that these trails deliver fantastic value for money and grab the attention of prospective visitors in a media hungry world that’s always looking for the next new thing to write about. Associating ourselves with a new movie, and at the same time as series 2 of Victoria is airing on ITV, provides new reasons to visit the Island, and due to the timing, works to encourage Autumn and Winter visits. Extending the season and attracting new visitors from higher demographic groups were two of the principle aims the Industry asked us to concentrate on within the Wight BID plan this year”