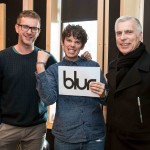 Formed in 1990, and initially known as Seymour, Blur came to epitomise what was termed Britpop.
After gradually building a reputation for well-crafted songs they scored the first of five Number 1 albums in May 1994 with ‘Parklife’.
Its title track featured the distinctive voice of actor Phil Daniels.
Come 1995 they amassed four Brit awards. As well as being Best British Group they took another trio of awards courtesy of ‘Parklife’. These consisted of British Single, British Album and Best British Video.
In August 1995 ‘Country House’ gave them their first (of two) Number 1 singles, pipping ‘Roll With It’ by Oasis in the process. This chart battle gave both acts invaluable media coverage which doubtless enhanced the credentials of both protagonists.
Well known Blur songs include: ‘There’s No Other Way’- their first Top 10 entry- ‘Girls and Boys’, ‘The Universal’, ‘Charmless Man’, ‘Beetlebum’,-their second Number 1- ‘Sing 2’ and ‘Tender’.
Blur reunited in 2009 to play two concerts in Hyde Park, London. They were also the Sunday headliner at Glastonbury in 2009 when Bruce Springsteen and Neil Young, who have headlined at Seaclose, were the other Glastonbury headliners.
Away from music bassist Alex James has forged a reputation as a cheesemaker.

Organisers of The Isle of Wight Festival were very excited to finally reveal that, following next month’s release of their new album ‘The Magic Whip’, Blur are confirmed to headline the Saturday night.
‘The Magic Whip’ is Blur’s first album as a four piece in 16 years and three new tracks from the record, ‘Go Out, ‘There Are Too Many Of Us’ and ‘Lonesome Street’, have been sent to fans ahead of the album’s release on 27th April on Parlophone.