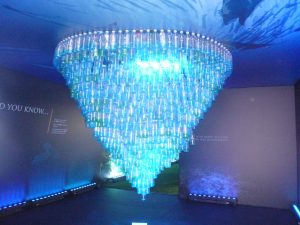 Chandelier made from plastic bottles in the Blue Marine Exhibition.

On board Tall Ship Kaskelot special guests Sir Robin Knox Johnston and Miranda Krestovnikoff performed the official opening for the 50th anniversary of the Southampton Boat Show this year sponsored by TheYachtMarket.com. 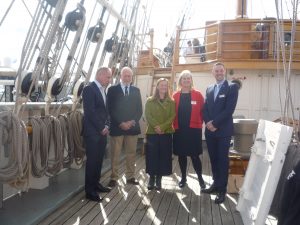 It coincided with Sir Robin’s 312 day circumnavigation in the Golden Globe Race fifty years ago. Miranda, a presenter on BBC “Coast” said she once ran out of air whilst diving when filming. One of her memorable experiences was encountering grey seals off the Farne Island.

Insurer GJW Direct has linked up with the RNLI under the banner “Working together to prevent drowning.” Evidently, when the RNLI check lifejackets they find a staggering 30% are not fit for purpose, thereby exposing the user to unnecessary risk. 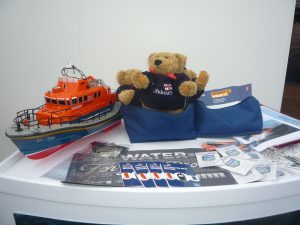 Simon Le Bon (Duran Duran) arrived at the show aboard a Sunseeker motor yacht in his role as an ambassador for the Blue Marine Foundation which is trying to rid the oceans of plastic. A sailing holiday when he was 10years old instilled his love of the sea hence his long- time support of a marine charity. He drew attention to the massive decline in fish stocks and the peril of plastic in our oceans. It was his task to open the “Blue Marine Exhibition” which is housed on the Sunseeker stand. 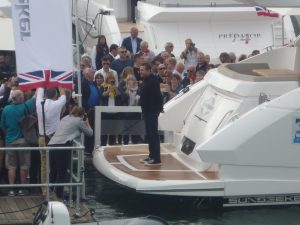 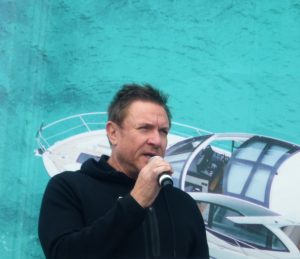 With the show having long-term commitment to marine conservation, organisers have pledged a three-year plan to minimise the environmental footprint and help raise awareness of the plight of the world’s oceans.

Research ship RV Callista on berth M455 invites visitors to go on board and have a tour to see a remote autonomous vehicle (ROV) in the water filming under the boat. See footage captured using the ROV and make sure you look at the plankton samples under the microscope. Also visit the Science of the Sea Experience Exhibition on Stand E030. Miranda Krestovnikoff visited the exhibits which are designed to show visitors more about the mysteries which lay beneath the waves and the latest technologies which are helping keep our oceans clear of plastic pollution. 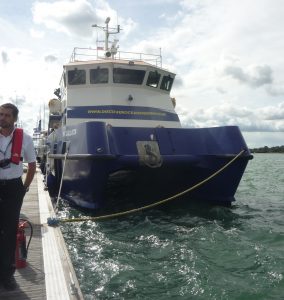 PSP Logistics, which at one time had a depot in Cowes, were title sponsors of the show for eight years. Established twenty years ago they have an ambition to triple their business in the next three years by seeking new markets around the World. Sponsoring the show has certainly helped this company in its development.

For the first time a sailing regatta will be held during the show- TheYachtMarket.com Regatta. Taking place across the 17th, 18th and 19th of September contenders will compete for the City Cup, Women’s Cup and Property Cup. There is also a Community Cup challenge for young people who have faced tough personal challenges. Racing on Southampton Water with the backdrop of the show, Sunsail will provide the boats, Match First 40s, complete with skippers so that anyone wanting to sail can race.

Thanks to The Cruising Association one lucky member won a free Winter berthing for their boat at Venice Certosa Marina and there are other competitions running throughout the show.

As part of being aware of plastic pollution a number of beaches around the UK coast are undergoing beach cleans. These include several on the Isle of Wight. Some will be cleaned on Isle of Wight Day and others at various times. Members of Girlguiding IW will  be taking part in the clean-up.