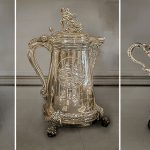 The new Cowes Week Triple Crown will be a regatta within a regatta : open to large IRC rated racing boats of at least 20m LOA with a minimum TCC of 1.500 and up to 36m LOA. Cowes Week takes place 29 July – 5 August 2017 and a series of three races will take place on the Tuesday, Wednesday and Thursday of Cowes Week, with the final race being an Around the Island Race, giving participating boats the opportunity to mount record-breaking circumnavigation attempts.  With a potentially wide range of boats expected to enter, from out-and-out racing boats to cruiser-racers, three classes will compete for the Triple Crown: Maxi-Racer Class; Cruiser-Racer Class and an Ocean-Racer Class.

Three of  sailing’s most historic and prestigious trophies will be awarded to the three classes:  The Queen’s Cup, presented to the Royal Southampton Yacht Club by Queen Victoria in 1897; The King George V International Cup (also known as the White Heather Cup) from the Royal Thames Yacht Club, a huge flagon that was awarded for the 23 metre class in 1911 and won by White Heather II and the Royal Yacht Squadron’s  Kings Cup 1920 which was presented by King George V in 1920 for a  race for yachts exceeding 100 tons.  The overall winner of the three races will be presented with the Triple Crown trophy. Further details of this will be available shortly.

This inaugural Triple Crown event happily coincides with the Rolex Fastnet Race this year, and with the 100ft limit being relaxed on monohulls for the Fastnet, it is anticipated that many big boat owners will look to participate in both events.  With separate classes to differentiate the faster racing boats, and starts from the Royal Yacht Squadron line, the yachts racing in the Triple Crown will provide a fantastic sight for spectators ashore and afloat.

As the Official Technical Clothing Partner to the FAST40+ Class, Henri Lloyd will be working alongside the class organisers and owners to provide bespoke crew kit packages on Henri Lloyd’s latest inshore race apparel. In addition, all FAST40+Class crew will also benefit from the Henri Lloyd – FAST40+Class Privilege Club.

As part of the partnership, Henri Lloyd will be bestowing a perpetual trophy for the 2017 FAST40+ Race Circuit. Henri Lloyd will also be working with the FAST40+ Class on a number of other projects over the next two years.

The FAST40+ Class is innovative and highly technical; the showcase racing at many top class regattas, this makes them the perfect fit for Henri Lloyd. Over the upcoming months, we will look forward to meeting the crews and watching some exciting racing.” Paul Strzelecki, Henri Lloyd Chairman.

“We are delighted to have Henri Lloyd on board for the next three seasons. Technical excellence, innovation, and best in class, are just some of the reasons why Henri Lloyd was chosen as our technical clothing partner. It will be an honour to present the Henri Lloyd FAST40+ Trophy, and we look forward to a rewarding and exciting partnership.” Robert Greenhalgh, FAST40+ Class President.

Henri Lloyd will be working with the FAST40+ Class during the 2017 FAST40+ Circuit, including Cowes Week and the One Ton Cup.

Meanwhile across the Atlantic Ocean two special regattas are planned for February/ March/April both with Isle of Wight sailors and boats that regularly sail out of Cowes taking part.

The RORC Caribbean 600 attracts the world’s fastest racing yachts, magnificent superyachts and corinthian production cruisers. Now gathered in Antigua for the start ,on the 20th February, of the 600-mile blast around 11 Caribbean islands, the fleet is a phenomenal sight. Among the spectacular entries this year are two colossal schooners; Eleonora and Adela, with at least 12 classic-designed yachts joining them on the race course.

Adela dates back to 1903 and at 182ft (55 metres), she is the largest yacht competing in the race. Displacing 250 tons and capable of 17 knots of boat speed, the forces on board are off the charts; the mainsail alone can generate 50 tons of load. Adela has an extraordinary record in the race; coming in the top ten overall under IRC in all four races she has competed in, including third overall in 2013. Adela is unbeaten in the Spirit of Tradition Class and is likely to have 35 crew for this year’s race. Since she last competed in 2015, the schooner has undergone major modifications to her rudder and keel.

Displacing 213 tons with an overall length of 162ft (49.5 metres), Eleonora is an exact replica of the famous 1910 Herreshoff schooner Westward. Since her launch in 2000 she has followed Westward’s heritage of racing, however, this will be Eleonora‘s first RORC Caribbean 600.

This race  will be a real challenge for the crew and they are looking forward to it. For the race members from the Royal Yacht Squadron Cowes and the Royal Ocean Racing Club will be on board and they are keen to have a memorable race.

The British Virgin Islands are hosting their Annual Spring Regatta- March 27- April 2. Andrew McIrvine, who often takes part in sailing regattas out of the Isle of Wight, is  a Spring Regatta veteran returning to the event for the first time in some 20 years. He’s chartered the Beneteau First 40 Olympia’s Tigress  and will be racing with his crew, Team Larry.
“The boat we have is a sister ship of my own boat in England on which we’ve been very successful; we’ve won a lot of RORC and other European events with my usual gang on board. Last year we won our class at Cowes Week and a couple of years before at Les Voiles de St Tropez. Tony Mack (Mack Fly) won class at Spring Regatta last year on the same boat.”
The last time McIrvine sailed Spring Regatta was on a Jeanneau 47 and he’d always wanted to do it again. As Admiral of the Royal Ocean Racing Club, McIrvine was involved in the launching of the RORC Caribbean 600 which he has competed in since that race’s inception. This year he wanted to do something different and will have a team of 12 with him.
“It’s probably too many but everyone wanted to come,” McIrvine laughed. “We’ve hired a young foredeck guy as we’re mostly getting old, so that should keep the front end sorted out. I do have Tasmanians on board – not just Australians, but Tasmanians – so we could be in big trouble there. We expect to be reasonably competitive if only I can only keep them off the rum!”
We use cookies on our website to give you the most relevant experience by remembering your preferences and repeat visits. By clicking “Accept”, you consent to the use of ALL the cookies.
Cookie settingsACCEPT
Manage consent