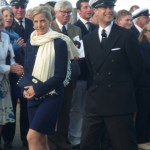 To commemorate the bicentenary of the Royal Yacht Squadron, now based in Cowes, this historic club, which was inaugurated on 1st June 1815 at the Club’s first meeting in St James’s, London, has held a very special regatta which included other celebratory events.

His Royal Highness the Duke of Edinburgh, as Admiral of the Royal Yacht Squadron, was joined by other members of the British Royal Family and European Royal families on 5th June to conduct a Review of the yachts and motor boats, belonging to members of the Royal Yacht Squadron (RYS), off Cowes .
In excess of 180 private sailing and motor boats of all sizes provided a real spectacle dressed overall, from the smallest RIB to sailing superyachts. Two royal yachts, from Norway the Norge (built in 1947) and from Denmark the Dannebrog (built in 1932) were also present as was the 75m motor yacht Leander and the recently restored , but 1938 built, Shemara. A Royal Navy Type 23 frigate HMS Northumberland and THV Galitea were in attendance.

The Duke of Edinburgh was joined during the day by other members of the British Royal Family including HRH The Princess Royal, the Earl and Countess of Wessex (Sophie is national President of Girlguiding) and HRH Prince Michael of Kent. This Fleet Review was part of a varied programme of celebrations by the Royal Yacht Squadron both on and off the water taking place during 2015.

Spectators both ashore and afloat enjoyed glimpses of the Royal guests as The Duke, accompanied by the Commodore of the RYS Christopher Sharples, and Prince Michael of Kent proceeded between the rows of moored members’ yachts in a pair of naval P2000 vessels, to salute each in turn. Later in the day the royal party came ashore and attended a church service conducted by the Bishop of Portsmouth Rt. Rev. Christopher Foster, at Holy Trinity Church, Cowes.
Following the church service members of the RYS were joined by members of the public who had gathered on Cowes Parade for the Beating Retreat ceremony conducted by the Band of Her Majesty’s Royal Marines Collingwood and with the salute being taken by the Duke of Edinburgh.