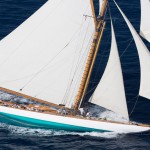 Entries for the Royal Yacht Squadron’s Solent summer celebration of 200 years, the RYS International Bicentenary Regatta, have reached sixty and still counting, as entries continue to arrive by the day.
A much hoped-for fourth J-Class yacht Rainbow has just confirmed that she will be joining the other three, Velsheda, Lionheart, and Ranger for the hugely anticipated Solent spectacular. More latest additions confirming their line up on the start line of the seven day regatta, starting 25th July, include the William Fife design Mariquita,(pictured) widely considered to be one of the world’s most beautiful classic sailing yachts. Built in 1911 and restored to complete glory in 2003, Mariquita has once again shown herself to be a serious contender in a packed European racing programme in recent years.

There couldn’t be a wider contrast between this 104 year old yacht and Spectre, the Frers designed 60ft day racer being guest helmed at the event by Sir Charles Dunstone. Two time Olympic Silver Medallist Nick Rogers will be taking charge of tactics onboard. He says “The International Bicentenary is going to be a great event and we are really looking forward to using it as a platform to get Spectre going.”

Completed only last autumn this will be the first time that the Persico Marine-built flyer will be seen showing her full potential in the UK. With a name evoking the imminent James Bond film, this space aged racer with her large, open and an almost empty cockpit and a 4.80m cross beam could have come straight from the set.

The pair will be contesting a competitive IRC fleet, sailing alongside such other classic beauties as Saskia and Tomahawk, and grand prix racers which range from Mike Slade’s mighty Leopard to Piet Vroon’s Tonnere of Breskens.

There’s action in smaller boats too – and from teams from across the world. Royal Varuna Yacht Club, a competitive racing club located in a tropical paradise just two hours from Bangkok is fielding a team for the Bicentenary’s Level Rating class. Their crews will be sailing against a number of other club teams.
As part of the celebrations the RYS has launched a special website for the Royal Yacht Squadron’s International Bicentenary Regatta which is now live.
Go to www.bic2015.org.uk to see entry information, entry lists, regatta information, programme information and where to spectate from.