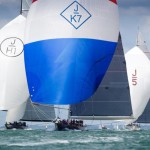 After a day of cancelled races on Monday due to weather conditions the other four days of racing saw an International Regatta of very high standards and some days with perfect sailing conditions.
By Tuesday morning there was anticipation as winds and sea state were still looking strong but the call was made and racing was on, and it turned out to be a good decision.
Racing took place on various courses across the Solent depending on yacht classes. On a breezy start line where early gusts of 30 knots were being recorded, the starters in the ‘grand prix’ class crossed the Royal Yacht Squadron line on a downwind start with startling acceleration. Terry Hutchinson, multiple world champion and winning America’s Cup tactician was on board Bella Mente, Hap Fauth’s powerful 72-foot Judel/Vrolijk Mini Maxi, which went on to win IRC Class 1 that day. However, despite Bella Mente’s immense speeds at the start, Rambler overshadowed the entire fleet off the line with even greater speed to take the lead on the water in the first leg eastwards beyond the two forts in the Eastern Solent. Rambler completed the 22 mile course which took in seven turning marks, and was back on her Cowes mooring just one and a half hours after the start.

In contrast to the speeds on the grand prix race track a more sedate race was experienced by IRC Class 3’s classic yachts. “It was not too windy for us, we managed to stretch a lead on the water, as well as winning overall, which we are very pleased about.” said Argyll’s captain Alexis Bordessoule, who sails with owner Griff Rhys Jones on board the 57′ Sparkman and Stephens yawl which was launched in 1948.

In IRC Class 4 some competitors described the experience as ‘very wet’. Whooper, the eventual winner, got quickly away and Whooper’s win was no surprise. This year’s JPMAM Round the Island Race champion is expertly handled by her crew and owner Giovanni Belgrano who restored the 1939-built yacht in 2001 and has been winning on the race circuit ever since.

Two classes, the Level Rating Class and the Team Racing Class have been invited specially to the event to mark the Royal Yacht Squadron’s 200th anniversary. Both have their own ‘race courses’. On Tuesday the Level Rating class enjoyed their own good racing on the mainland shore opposite Cowes. This fleet of identical Beneteau First 40s, racing separately to the rest of the regatta fleet achieved two races with wins going to a team from Hong Kong and the St. Francis Yacht Club, USA.

‘Race Around the Island’ (RATI) was the main event for Wednesday and was the first chance for the long awaited sight of the three J-Class yachts getting together to race in the Solent. Patient spectators on the shore and in a flotilla of boats had to wait an extra 20 minutes though before the Js, Velsheda, Ranger and Lionheart got into race mode. The Commodore of the Royal Yacht Squadron, Christopher Sharples took the helm of Ranger for part of the race. “We had perfect conditions with a good stiff breeze and a few bumps in the wind against tide conditions off St. Catherine’s. It was a great atmosphere to be on such an iconic yacht surrounded by spectator boats, a very special experience,” he said.
The Js weren’t the first starters of the race however with the first slot going to the three grand Classics, Zybnek Zak’s Eleonora, Mariquita co-owned by John Caulcutt from Yarmouth and Sumurun, owned by A. Robert Towbin. The Fife designed 1911-built Mariquita’s elapsed time of 06:39:51 secured her first place of the three classics.
Sharing their start line was a MOD catamaran Concise 10. “We had a lovely jaunt around the Island,” said helmsman Ned Collier-Wakefield. “It was a little bit less breeze initially than we had hoped for and then a little bit more so at the finish. We came back up from Hurst Castle through the Western Solent to the finish doing a top speed of 32 knots.” Concise 10, not surprisingly, was line honours boat, finishing at 11:41:56, with an elapsed time of 3h and 32m.

On Thursday some of the focus was on the Level Rating Class and the Team Racing Class. The 10 yacht clubs taking part in the Team Racing Event from around the world and the UK were racing on a small course in the sheltered waters of Osborne Bay. On the opposite side of the Solent on the North Shore the Level Rating fleet were competing in equally close races.
With a big change in the weather and with very little wind, Friday’s racing was somewhat tricky. Velsheda maintained her excellent record on what are considered the famous yacht’s ‘home waters’ by winning the class. All three Js sailed a shortened course and Ranger had guest Sir Ben Ainslie on board. The three grand Classics, Eleonora, Mariquita and Sumurun were given one long leg, against the tide, to a mark near the forts off Portsmouth.

Class 4 was abandoned in the light winds while Class 3 had only one finisher, A. Rives Potts’ Carina.

At the end of the regatta a crew member, Richard Mason of Dorade, commenting on the weather said, “Four seasons in one week”. There had been Monday’s gales followed by a gradual wind reduction to the windless afternoon that ended the regatta”.

To round off the regatta competitors were treated to a spectacular parachute display by the Red Devils, who landed in the water near the assembled guests on the Royal Yacht Squadron’s lawn. In wrapping up the event, the Commodore, Christopher Sharples thanked all the crews from the 24 clubs from all over the world for sharing the club’s 200th birthday, saying “This is not just for the club but for the town of Cowes as well. The next two hundred years begins now.”