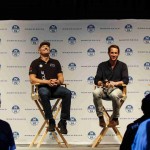 On the opening day of the RYS Bicentenary International Regatta three leading sailors took to the stage in Cowes Yacht Haven’s Event Centre to participate in a question and answer session.
Presented by North Sails the event was hosted and compared by the company’s President Ken Read. He introduced the audience to the America’s Cup winning skipper Jimmy Spithill, Olympian Gold sailor and AC campaigner Sir Ben Ainslie and Round the World female sailor Sam Davies.
In his introduction Ken pointed out three key areas in sailing-Inspiration-Encouragement (Growing the Sport) and Nurturing. Statistics show that one in fifteen would-be-sailors continue to participate in the sport.
In answer to questions and referring to the recent America’s Cup World Series event in Portsmouth Ben said that he was not on first name terms with the Royals but he was very grateful for their support.
He was amused by the sight of more than 2,000 spectator boats on the water to watch the fleet racing. That and the crowds around the racecourse off Portsmouth/Southsea was a big surprise.
It had taken 18 months to build up the British team that will hopefully contest the America’s Cup proper in Bermuda. Ben thought the appointment of an ex Formula 1 team principal Martin Whitmarsh (Mclaren) as CEO of the BAR team three months ago was a crucial development.
His only worry was the foil technology, “We are playing catch up. You are only allowed to build six dagger boards so the scope for experimenting is limited.”
Ben added that he and Jimmy were fierce rivals but they were also good friends. They sailed together in 2000 and famously came together in the last edition of the America’s Cup with Oracle Team USA looking dead and buried when 1.8 down.
Jimmy acknowledged that Ben’s team is going to be highly competitive, but “he did selfishly leave us”-he quipped adding that he was going to enjoy a hard, fair fight.
After another question from the floor with regard to figureheads, Jimmy admitted, “With any team in any discipline there is always a figurehead who gets all the attention. For motivation, you only have to look to the back room team members- the unsung heroes.” Sam added to this that in her single-handed sailing if it had not been for the back-up team things would be very different.
All three panelists agreed it was important to encourage young sailors. Sam said that Volvo had done a good job of introducing young visitors to the Volvo World Race.
Yachting is a big event in France, where Sam now lives, saying that young people were given every encouragement there.
Jimmy pointed out that the Youth America’s Cup was viewed as a distraction by some, but a lot of good came out of t with the winner now skippering Team New Zealand.
Looking to the Next America’s Cup Jimmy said that Oracle had a very young team adding that today kids have so many distractions.
Ben said that his 1851Trust majors on youth development which can only be a positive factor. Young people joining the Trust could not only learn to sail but could cover all aspects of the marine industry from boat design and building to technology.