The Earl of Wessex (HRH Prince Edward) visited the Isle of Wight on the 29th April. Arriving at Ryde via Hovercraft upon disembarking he was gteeted by the Island’s Lord Lieutenant Martin White and met with participants who are taking part or have recently achieved Duke of Edinburgh’s Awards. Included in this group was Emma Snow, Gold Award holder and IW Duke of Edinburgh’s Award Young Ambassador.

As part of the DofE’s Diamond Anniversary celebrations everyone has been invited to take the DofE Diamond Challenge. This Challenge is inspired by the DofE Award, asking you to take on your own adventure, personal or skill challenge.

Your challenge can be as big or as small as you like, from kayaking the Zambesi to learning to knit. If it’s a challenge to you, it counts and the best part is, it’s open to anyone of any age, anywhere!

Following the Earl’s arrival he visited Ryde Arena where he was greeted by young people and where he undertook a walk-about chatting to those involved with the Award on the Island as well as participants who are taking part in Bronze, Silver or Gold Awards. 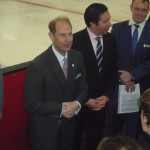 Amongst those who spoke with the Earl were Dale Godfrey who has recently taken part in The Diamond Challenge, Gold Award holder and long-time D of E group leader Suzanne Whitewood MBE and Robyn Johnson who has recently achieved her Bronze Award.  Robyn from Sandown Bay Academy was presented with her certificate and Bronze Badge by Lee Matthews IW Council officer responsible for the D of E on the Island. 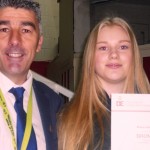 Prior to Prince Edward’s arrival at Ryde Arena heats had taken place to decide the finalists of races skated on the ice which had been undertaken by school teams. Later Prince Edward watched a display of synchronised skating by Wight Jewels before presenting the prizes to the winners of the races- Ryde Academy-and unveiled a commemorative plaque to mark the occasion of his visit. 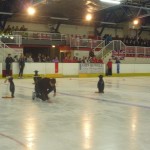 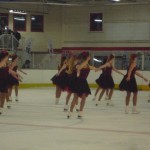 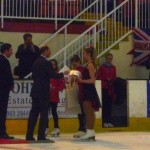 On return to the Hovercraft Terminal the Earl spoke with head-teachers from both the Island and Portsmouth about the Duke of Edinburgh Award before embarking for the return Hover Travel trip to Portsmouth. 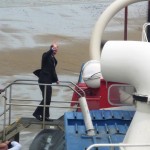 A number of Senior Section members of Girlguiding Isle of Wight are taking part in the Duke of Edinburgh’s Bronze Award.