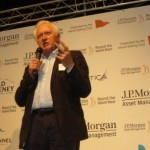 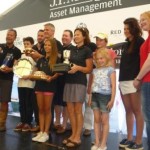 What a difference a year makes!  Last year’s J. P. Morgan Asset Management Round the Island race saw the race record times for both the monohull and multi-hulls smashed by 9 minutes 45 seconds and 16 minutes respectively.

For the 2014 edition of the race lack of wind saw competitors becalmed for long periods of the day. Despite 669 boats retiring 724 finishers were recorded.

Indeed, a new record for the first across the line in the slowest ever elapsed time of 8hours 52 minutes was set. Compare that with Sir Ben Ainslie’s time of 2:52 in 2013.

Rod Nicholls was the Principal Race Officer after stepping down, after three years, as Commodore of the Island Sailing Club which has organised the race since it began in 1931. This year sees the ISC celebrating its 125th anniversary.

J.P. Morgan staff invited family and friends-some 150 this year- to take up the Round The Island cycle challenge. Under Andy Graham 12 cyclists first undertook the cycle ride in 2007. Since 2011 the official charity for the event has been the Ellen MacArthur Cancer Trust and, once again, the cycling team raised the most money for the charity.

Race title sponsor J.P. Morgan Asset Management has supported the ISC for a decade and has agreed a two year extension.

At the pre-race press conference ISC Commodore John Dudley said that it was most important to see everyone taking part in either the sailing or cycling events were safe. John himself has a 38 year connection with the event as both competitor and race official.

Invited to start this year’s race veteran TV presenter David Dimbleby was also invited to speak at the press conference. Here he revealed he first raced Round the Island 50 years ago on a SCOD where he suffered sea sickness for three hours whilst his then girlfriend was fine.

Best known as chairman of ‘BBC Question Time’ and commentating on state occasions and General Elections he referred to his four part series on sailing round Britain. Travelling on his 29foot gaff rig boat ‘Rocket’ was a delight he said.

Whilst in Plymouth in an uncharacteristic move he had a scorpion tattooed on his right shoulder. Having mentioned it only featured six legs he proceeded to remove his jacket and shirt and show the tattoo to an amused press conference audience.

As race starter he revealed he had previously fired a cannon at Southsea Castle and he appeared to be disappointed that for the race start he would only be required to press a button rather than put a taper to gunpowder. After the race David revealed that he had so enjoyed his weekend on the Island that he hinted he would be keen to return for next year’s race to be held on the 27th June.

Also at the press conference was race competitor Andy Green OBE. An RAF fighter pilot Andy has held the World Land Speed record of 763mph since 1997. Thrust SSC remains the only supersonic record car. Andy’s new project Bloodhound SSC aims to break through the 1000mph barrier in South Africa in 2016.

Weighing 7.5 tons and 13 metres long Bloodhound will be powered by a jet fighter engine delivering 135,000 Thrust h.p.  Using F1 and space age technology the car features a carbon fibre front and steel/titanium rear. Brakes are used only when the car has slowed sufficiently as they burn at 200m.p.h.plus.

Although Andy has been a keen sailor for some ten years his first Round the Island race was last year at a somewhat more leisurely speed.

For the Sunday prizegiving Sir Ben Ainslie, who has recently announced plans for his America’s Cup campaign, was on hand to present the prizes. Two large tables groaned under the weight of numerous trophies and a plentiful supply of Old Pulteney Single Malt Scotch Whisky. For the clipper Round the World Race 2013-2014 Old Pulteney is sponsoring an entry.

Amongst the trophy winners Tonnerre de Breskens was the first Monohull and first IRC entry with Paradox the first multihull.

Summing up his circuit of Vectis Edward said that both the Needles and St. Catherine’s Point resembled marina moorings. In Sandown Bay he observed sailors diving overboard and commented “I didn’t think it was that bad.”

He concluded by saying “It is humbling to be up on stage with Sir Ben Ainslie. He inspires so many people.”