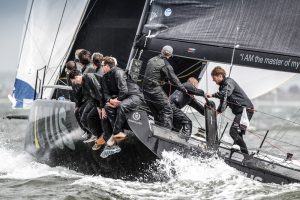 The Royal Ocean Racing Club (RORC) will lay on coaching for competitors in the RORC Easter Challenge being sailed out of Cowes over 14-16th April. This coaching will be both on the water plus detailed ‘post- match’ analysis and will be delivered for free by some of the World’s top coaches who have backgrounds in the America’s Cup and Olympic Games.

RORC Racing Manager Nick Elliott said “In our sport, apart from when you first learn to sail, often you don’t get any further coaching. You wouldn’t dream of trying to get to the top of any other sport without joining a club that provided coaching and support for its athletes. It is bizarre that sailing hasn’t embraced coaching in the same way.”

As is tradition, the RORC Easter Challenge is the start of the club’s domestic programme with three days of inshore racing on the Solent starting on Good Friday and culminating with the prizegiving on Easter Sunday. Whilst the regatta offers crews the chance to blow away the winter cobwebs. It is also, uniquely, the RORC’s annual ‘training regatta’.

If there are any specific issues a team wants the coaches to look at, they can either ask while out on the water or can submit a request to the RORC in advance.

Each day after racing, there will be an extensive debrief held at the RORC Cowes Clubhouse, where the coaches will provide analysis of the day’s racing for the benefit of all.

The team of world class coaches for the Easter Challenge will be led by Jim Saltonstall, MBE, a man who has played a significant role in honing the skills of so many British Olympians including Sir Ben Ainslie. Jim is joined by the RORC’s CEO, Eddie Warden Owen, who aside from being an accomplished sailor is a past America’s Cup coach for Team New Zealand and Desafio Español.

North Sails will again support the regatta with their North U. Regatta Services, providing on the water coaching, including aerial video analysis. The North Sails team will also provide detailed weather forecasts and an overnight sail repair service.

The RORC Easter Challenge and its coaching opportunities are open to all entrants, not just RORC members. Nick Elliott extends the invitation: “It is not often that you can get on the water coaching and certainly not at the level of Eddie and Jim and the North Sails team. if you want to get ahead of your competitors come and do the Easter Challenge! Why would you not come and benefit from FREE coaching. It is a bit of a no brainer really.”

After a busy winter with lots of the FAST40+ race teams carrying out some exciting developments to their boats, 5 of the teams are ready to hit the water for early season racing for the RORC Easter Challenge on the Solent.

The 5 competing FAST40+ at the RORC Easter Challenge will be 42º SOUTH– Mark Rijkse’s New Zealand flagged, IRC optimised Reichel Pugh 42, HITCHHIKER– Previously owned by Peter Morton (Girls on Film), this boat won the 2016 season now new owner  Bastien De Voogd brings the first Dutch team to this class, INVICTUS– Sir Keith Mills and the team on board this  Ker 40+ are looking forward to this challenge and the FAST 40+ season where they hope to build on last year’s 2nd place finish, TOKOLOSHE– Mike Bartholomew and team have been putting in a lot of work over the winter to their Carkeek designed South African flagged boat and ZEPHYR-Steve Cowie’s boat is also ready for action sailing mostly with an amateur Scottish crew.

Although this event does not count as part of the official FAST40+ Race series, it does give the teams the chance to get back into action. Henri Lloyd, the Official Clothing Partner of the FAST40+ Class, is providing a perpetual trophy for this class, the “Henri Lloyd Challenge Trophy” and this will be presented to the class winner for this event at the prizegiving on Easter Sunday.

Race programme for the week-end will include windward – leeward courses and round the cans courses with 8 races scheduled.

The first warning signal each day will be at 1030.