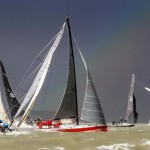 This year’s RORC Easter Challenge saw the long-awaited advent of competition for the new FAST40+s, in the big boat class. Good Friday was chilly but with Summery conditions. Three races were sailed with the wind peaking at 15-20 knots during race two.

Among the ten FAST40s, there was a different winner in each race, but ultimately there were two stand-out performers in American William Coates’ Ker 43, Otra Vez, and Peter Morton’s brand new Carkeek 40 Mk3, Girls on Film. They won the third and first races, respectively, while Sir Keith Mills’ Ker 40+, Invictus, claimed race two.

While the FAST40+s stole the show, in the other three classes there were also standout performers, including RORC Admiral Andrew McIrvine on his First 40, La Réponse.  Two bullets in Friday’s final races, give him a three point lead in IRC Two. In IRC Four, it was closes at the top with Sam Laidlaw’s Quarter Tonner, Aguila, a mere half point ahead of Harry J. Heijst’s S&S 41, Winsome.

In IRC Three  Tom Kneen’s Sunrise posted a 1-2-2, despite Kneen having only had the boat for three weeks and Friday being just the third day of racing her. “I am absolutely delighted,” said Kneen, who intends to enter the selection for the British team in this year’s Brewin Dolphin Commodores’ Cup.

With gale force gusts forecast for the afternoon of Easter Saturday, one long race on a ‘round the cans’ course in the central/eastern Solent was held. Despite this, there were leader changes in two of the four classes.

In the FAST40+ class, Peter Morton on Girls on Film, won to topple Texan William Coates’ Otra Vez.  Girls on Film spent the day match racing Sir Keith Mills’ Invictus. Mills made the best of the reaching start, but Girls on Film subsequently overhauled them.

Having been the driving force behind the resurgent Quarter Ton class in recent years, Peter Morton is enthusiastic about the new FAST40+ class.“It is a great class: 40ft has always been a perfect size for the Solent and the fact that these boats get up and go, makes it a lot of fun.” he said.

Unusually, in all three other classes there is a boat that has won three of the four races.

Holding the largest lead of all is RORC Admiral Andrew McIrvine on La Réponse, now six points clear of Irishman Conor Phelan’s Ker 37 Jump Juice in IRC Two   Andrew McIrvine,  is gunning for British team selection for this summer’s Brewin Dolphin Commodores’ Cup, and attributes his success to two training sessions he’s already completed this season and to the strength and experience of his new crew.

Elsewhere Tom Kneen’s JPK 10.80, Sunrise, was clinging onto first in IRC Three. Despite David Franks’ smaller JPK 10.10, Strait Dealer, having scored bullets in the last three races, he remained one point behind.

As this challenge is used as a training regatta Jim Saltonstall, RORC CEO Eddie Warden Owen and North U Regatta Service’s Andreas Josenhans and Chuck Allen, had no shortage of material to work with following some spectacular broaches and wipe-outs during the morning,

Fortunately the MOB lifejackets inflated and they were recovered after a few minutes and hauled onto a RIB by RORC Commodore Michael Boyd and lead coach, Jim Saltonstall. The incident cost La Réponse victory in IRC Two. The overall class prize went to Ireland’s Conor Phelan and Jump Juice with former RORC Commodore Mike Greville on Erivale III  second.

Despite a strong challenge from David Franks’ JPK 10.10 Strait Dealer, which claimed three bullets in five races, it was the newer Sunrise that prevailed in IRC Three, winning the challenge title.