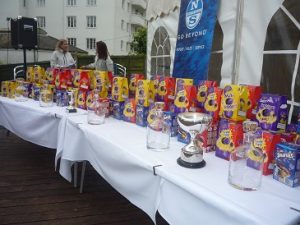 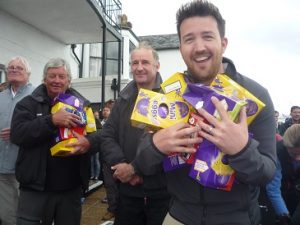 This year’s RORC Easter Challenge got off to an ideal start on the Solent on Friday. Three races were held in the day with the first of two windward-leeward courses sailed off Lee-on-the Solent starting in a 7 knot southwesterly. This breeze built during the day until it was gusting to 20+, which, combined with a wind-against-tide sea state, made for a challenging final round the cans race which featured a reaching start and eventually took the 50 competing yachts back towards Cowes.

Star performer of the day was Sir Keith Mills’ Ker 40+ Invictus which scored three bullets in the five-strong FAST40+ class which were racing within IRC One. Outside of the FAST40+ yachts, it was former RORC Commodore Mike Greville whose well-travelled Ker 39 Erivale III stood out, finishing the day four points clear of Roger Bowden’s King 40 Nifty.

Sam Laidlaw’s Aguila was not only top Quarter Tonner but leader of IRC Three after the day’s three races having won the final two races. Cowes resident Louise Morton’s past Coutts Quarter Ton Cup winner, Bullit, once against sailed by an all-female crew, including 2013 Match Racing World Champion and Olympian Lucy Macgregor, suffered from an OCS in race one. However, they were back on form for the subsequent races.

Day two saw three races held on the central Solent, with a round the cans followed by two windward-leewards, due to the tidal state. Conditions were good, starting in a chilly, overcast 7-8 knot northwesterly and finishing in brilliant sunshine and winds gusting to 20 knots.

Despite shifty conditions and the contrary tidal state across the race track, La Réponse skippered by Admiral of the RORC, Andrew McIrvine and in IRC Two and Invictus in the FAST40+ class showed impressive consistency, both scoring 1-2-1.

Mike Greville and his Ker 39, Erivale III, won the day’s first race in IRC One and topped the IRC One leaderboard at the end of the day whilst in IRC Three Aquila retained the top place but top scoring boat of the day was Bullit, posting a 4-1-4 leaving Louise Morton’s all-female crew in fifth place overall, just 1.5 points behind of another Quarter Tonner, Bullet, steered by husband Peter.

Easter Sunday saw a change of fortune for Erivale III (IRC One) which managed to lose her three point lead in the opening round the cans race and the victor was only decided on the final, head down, charge for the finish line in race two.

Ultimately Roger Bowden’s King 40, Nifty, claimed first overall, two points ahead of Erivale with another King 40, Cobra, another point behind.

Star performer throughout the regatta was Sir Keith Mills’ Invictus in the FAST 40+ class, racing within IRC One. With a 1-3 on Sunday this Ker 40 won the regatta by a mighty 11 points.

In IRC Two, a late charge from RORC Admiral Andrew McIrvine on La Réponse was enough to get his First 40 onto the podium but not enough to make an impression on the race for the lead between David Franks’ JPK 10.10 Strait Dealer and Redshift Reloaded, the Sun Fast 3600 belonging to Ed Fishwick. 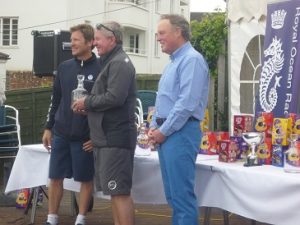 At the prizegiving which included dozens of chocolate Easter Eggs Michael Boyd. (RORC Commodore) said that it had been a great weekend. He would like to thank Nick Elliott and the RORC team, North Sails and Jim Saltonstall who had led the training programme. 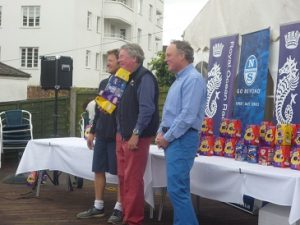