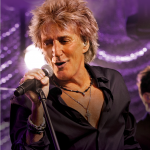 Music legend Rod Stewart will be on the Island next June, having been revealed as the Sunday headliner at the 2017 IW Festival, his only 2017 festival appearance.

After the announcement of his knighthood for services to music and charity in the 2016 Queen’s Birthday Honours he recently went to Buckingham Palace to receive the award from HRH Prince William. For this ceremony Rod was accompanied by his wife Penny and sons Alistair and Aiden.

Born Roderick David Stewart on 10th January 1945 of Scottish parentage, he is passionate about Scotland, and a supporter of the national football team.

In North London Rod attended the same school as Ray and Dave Davies, later to form the Kinks.

In 1961, he was keen to be a professional footballer and had a trial with Brentford FC. A period busking around Europe followed. His experiences were chronicled on the album ’Every Picture Tells a Story’.

Employment included grave digging and undertaking before performing in a number of groups in and around London in the sixties. From 1967-1969 he was a member of the Jeff Beck Group.

In 1969 he and Ronnie Wood departed the band, only to help form the Faces where he remained until 1975, as lead singer.

That year he quit the Faces and crossed the Atlantic to set up home in Los Angeles and try his luck as a solo artiste. There, he had a relationship with Britt Ekland, the first of a number of high profile female companions.

‘Reason To Believe’ written by Tim Hardin was his first hit single, which then became the B-side of ‘Maggie May’ which was destined to  be Rod’s first number one (of six). Now the latter is being considered for inclusion in the Grammy Hall of Fame.

His prolific musical output has garnered 64 Hit Singles, of which 26 made the Top Ten. His catalogue includes ‘Sailing’ penned by Gavin Sutherland, ‘Tonight I’m Yours’. ‘You Wear It Well’, ‘Baby Jane’, ‘Downtown Train’ and ‘Mandolin Wind’.

In 1972, he provided the uncredited lead vocals on ‘In a Broken Dream’ by Python Lee Jackson, a number three hit. History repeated itself in 1991 when he sang (unrecognised) on ‘My Town’ by Glass Tiger.

Additionally, Rod Stewart has had 44 hit albums, of which 33 hit the Top Ten. He has clocked up eight number ones, the latest being ‘Time’ in May 2013.

At the turn of the century, he produced a series of hit albums based on ‘The American Songbook.’

“Rod The Mod” attracted numerous newspaper stories as he made the transformation into superstar.

At the moment he is touring the UK and this will be followed in March/April 2017 by a residency at Caesars Palace, Las Vegas with a two days visit to Mexico to perform there.