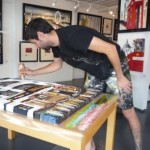 As well as a visit to his parents, who live in Cowes, Edward Waite was on hand at Kendalls Fine Art Gallery to demonstrate his unique style of painting recently.

Born in Sheffield Edward is a young up and coming artist described as “one of the UKs rising stars”. Referred to as a “contemporary cityscape artist” he prefers urban subjects over rural scenes.

Edward’s USP is his liberal use of fine lines of acrylic paint on his larger works. His Eureka Moment came about in a New York diner as he was squeezing tomato ketchup on to his chips. As a result he formulated a way to apply threads of colour via squeezing plastic bottles. Evidently his only problem is having to clear the nozzle regularly.

Whilst studying for his fine art degree at the University of Lincoln he was influenced and inspired by Keiffer, Pollock and Kline. On leaving university he embarked on a two year break.

In that time Edward travelled extensively as well as spending time with his parents helping them out in their picture framing business and in that period he learnt the art of picture framing.

Now a full time artist he has a studio in Lincoln, overlooking the cathedral. Each of his works begin by  drawing a sketch in a small sketchbook whilst in his chosen situation. For the subjects he chooses to concentrate on the next stage is to produce an initial sample picture.

Once the sample picture meets his satisfaction Edward now commences work in his studio on one of his 3D effect larger works by painting the background and then gradually building up the layers. When he reaches the stage for adding detail he will refer to a photograph of the subject. This acts merely as an aide-memoire rather than being religiously reproduced.

This year he has toured the UK giving demonstrations and one of these was in Cowes.  Kendalls Fine Art Gallery showcased his work recently and as well as finished work on show he was available for questions while working on his latest piece.

When I visited Kendalls Edward was working on a view of the ‘Pier View’ in Cowes High Street. Yes, he did have a squeezy bottle to demonstrate he has a steady hand when adding the fine ribbons of colour, which distinguish his output from others.

As he worked I discovered he is a keen supporter of the Blades (Sheffield United) and he has a long term partner, Amy, who was with him in Cowes and is responsible for the PR and business admin. They often visit the Island to see Edward’s parents who have made the Island their home after selling their picture framing business. His parents were looking for a more relaxed way of living and because they love the island decided to move here. Edward’s mother is the house manager at the Royal Yacht Squadron at Cowes.