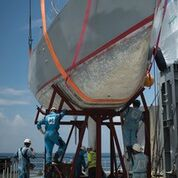 Although not an Isle of Wight story this item is published here as it involves an all female crew and the theme of the mission is to support and empower girls- something in line with Girlguiding.

‘Maiden’, the iconic boat that sailed into the record books in 1990, has returned home to the UK (Southampton) 27 years after making history in the Whitbread Round the World Race with her all-female crew.

Skipper Tracy Edward’s achievement with ‘Maiden’ in 1990 inspired a generation of women when she defied critics who believed it wasn’t possible for an all-female crew to take part in the Whitbread Round the World Race.

‘Maiden’ won two legs of the race and came second overall – the best result for a British boat since 1977 and a record that has never been beaten.

Tracy has worked tirelessly to bring ‘Maiden’ back to the UK and the boat’s restoration in Southampton will take a year, after which ‘Maiden’ will sail again, spreading the message via a huge global campaign that every girl has potential and the right to an education. The campaign is called “The Maiden Factor”.

Tracy has a number of supporters for the project including HRH Princess Haya Bint Al Hussein of Jordan who said, “My father, King Hussein I, would have been the first to offer his support and guidance to the Maiden Project. I, as a young girl, fondly remember his ‘hands-on’ involvement with the original project which made sporting history, and surprisingly feel how the issues of female equality and values he championed all those years ago seem even more relevant today.

Having the intrepid Tracy Edwards MBE back at the helm is something I know my father would have been so happy to learn and he would have wanted me to be part of this project.

As his daughter, I feel honored and humbled to be involved with the resurrection of the Maiden project as it embarks on its new chapter of maritime history. The knowledge that ‘Maiden’ will once again travel the seas, means not only will the memory and legacy of my late father live on but we can all use this a platform to highlight the need of equal access to education for girls in all corners of the globe, referencing something that he always believed in: ‘anything is possible’.”

Tracy Edwards MBE said, “It’s shocking to me that over 61 million girls around the world are still denied one of the most basic rights; access to education. The struggle to get ‘Maiden’ to the start line represents the barriers faced by so many, whilst also proving to the world that girls can overcome them, and achieve great things.

The crew of Maiden faced many obstacles and prejudices. Very few people believed an all- female crew could complete the race and not only did we prove everyone wrong, we won two legs and came second overall. Now we would like to do the same for women around the world, who are being denied an education and the opportunity to reach their full potential.

To have support from HRH Princess Haya Bint Al Hussein of Jordan in honour of Her father is incredibly special as I know that without HM King Hussein I, ‘Maiden’ would not have happened.”

The Maiden Factor’s vision is to enable girls around the world to fulfil their potential through education. The project will continue the legacy of Maiden’s creators and supporters to promote, lobby and fundraise for better access to education for girls. Maiden will be restored before embarking on a global awareness and fundraising tour. The Maiden Factor will use funds raised to support charities that are working to empower, teach or mentor girls and that promote, facilitate, lobby for or provide solutions which enable the education of girls not currently afforded that basic human right.

After a successful career in sailing, including being the first woman, in its 34 year history, to receive the Yachtsman of the Year Trophy, Tracy retired from competitive sailing in 1999 when she had her daughter Mackenna.

In 2013 Tracy discovered that ‘Maiden’ was abandoned in poor condition in a marina in the Indian Ocean so she launched a successful public bid for funding to save the yacht, with the intention of completely restoring her to her former glory and then using her to raise funds for the education of girls currently denied that human right. 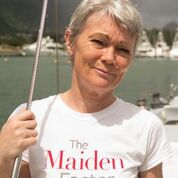