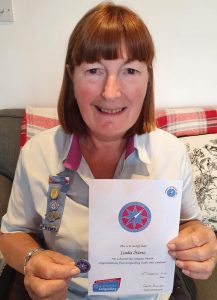 Linda Stone, the long serving leader of the 1st Carisbrooke (Princess Beatrice’s Own) Guide Unit has been awarded a Compass Award.  Linda is also the Girlguiding Isle of Wight Island Commissioner a post she has held since March 2020.

Compass Awards are presented by Girlguiding’s South West England Region of which the Island forms part together with 15 other counties and islands in the UK’s SW area.

The South West England Compass Award can be gained by any adult member of Girlguiding in recognition of their contributions and commitment to Guiding at unit level and for promoting Guiding in their local area or community. Awards are given to recognise the dedication of members at local level who give freely of their time on a regular basis and who provide good quality Guiding to the girls in their unit.

Due to COVID 19 Linda was presented with her Award in a virtual ceremony organised by the Region Office in Salisbury.

“Linda Stone has been running 1st Carisbrooke (Princess Beatrice’s own) Guide Unit with energy, enthusiasm and total dedication for over 25 years. She is a warm and welcoming Leader, inspiring the girls to do their best and encouraging them to believe in themselves. She creates an environment for young girls to thrive and a safe space for teenagers to share their thoughts and feelings. The girls are able to learn crucial life skills without fear of making mistakes. At one time, Linda’s unit grew so large that she split them into a senior and junior unit which met one after the other on the same evening. The Guides regularly join with other units for camps, embracing modern camping techniques with the traditional activities of the past. The Guides are often seen getting involved in the local community; taking part in ‘Walk the Wight’ to raise money for the Island’s hospice or celebrating the unit’s 1 00th birthday at Carisbrooke Castle in 2019. They rarely miss an opportunity to ‘get out there’.

In the past, Linda has held County advisory roles and has been a District Commissioner on two occasions. She is currently working towards her training qualification and is proving to be an excellent Trainer. More recently, she has taken up the role of Island Commissioner.

Linda is also the Island’s GO! guru. If Leaders have any queries or problems, she will be their first port of call and she takes the time to make sure they understand what they are supposed to be doing.

Linda is one of those people who, however bad things may seem, can always see a positive side or a way around a problem which in turn instils both positivity and confidence in others. She is a very supportive and encouraging member of

Girlguiding on the Isle of Wight, embracing the true meaning of being a member of the Guiding movement, valuing the past and not being afraid to step forward and take up new challenges.

Congratulations Linda you are a worthy recipient of the Region Compass Award.”

This year a record number of worthy recipients received the Region’s Compass Award which are signed by The South West England Region Commissioner-Carole Pennington. Thirty-eight volunteers were nominated, and thirty-one of these, together with their guests, took part in the virtual presentation.

Congratulations go to Linda and all the other recipients