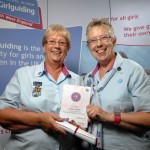 Girlguiding IW member Jenny Smart has become one of the first recipients within the South West Region of Girlguiding to receive a new Award.

Recently introduced The Compass Award is presented to those Girlguiding members who ‘go that extra mile’ for the charity and Jenny’s Award recognised her dedication to Girlguiding on the island.

A special ceremony was held at Milford House Hotel in Salisbury where Jenny was presented with her Award by Region Chief Commissioner Solange Rebours and a bouquet by Ruth Sara Region President.

Jenny thought that she was just a guest at the ceremony but was thrilled and surprised to be given the Award. She was congratulated by interim Island Commissioner Deborah Meadows who is seen in the photo with Jenny. (Jenny (L) Deborah (R)).

Deborah said “Jenny, her daughter Jane, and I enjoyed a wonderful afternoon at the first-ever presentation of Region Compass awards at Salisbury. This award is open to leaders in Girlguiding South West England to receive and Jenny was nominated by a number of her colleagues in Girlguiding Isle of Wight. It recognises outstanding contributions to Guiding, over a long time span. Jenny well deserves this award after over thirty years of Guiding, both on the Island and the mainland, holding not only unit leader positions throughout but also a wide range of County positions of responsibility, mainly in the outdoor activity capacity. She was also assistant Island Commissioner at one time. Jenny is caring and thorough in all she does and is highly respected by all of us with whom she works. The award is richly deserved.”

Jenny said after the event, “ I was really pleased to be nominated for this award, which came as a complete surprise.  I love giving time to Guiding as do so many other Island Guiders, helping young people to learn new skills and have fun.”